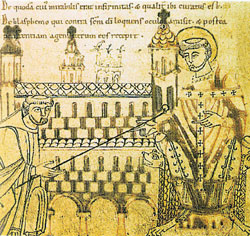 Archbishop, reformer, also called Hanno. Anno was religious as a child, entertaining thoughts of a military life, but he was guided by his uncle into an ecclesiastical state. In 1055 he became the archbishop of Cologne. Anno was well-educated in spiritual matters but also had literary knowledge as well. Because of his learning, he was invited by Emperor Henry III to the imperial court. His contemporaries said he was very handsome and eloquent. At the death of Henry III, Empress Agnes asked Anno to become the regent for young Henry IV. Anno was so strict that Henry IV demanded he be dismissed. However, the corruption of Henry's companions led to a reform of the court in 1072, at which time Anno became regent again. Anno aided St. Peter Darnien and others in reforming the Church in the region, was involved in the controversy between Pope Alexander II and antipope Honorius II, founded monasteries, and was known for his prayerful life. He spent his last years in a monastery doing penance. Anno had placed his nephew, Conrad, in Trier as bishop, despite the objections of Count Theodoric. Conrad was murdered by Theodoric as a result. Anno died in Sieburg Monastery.