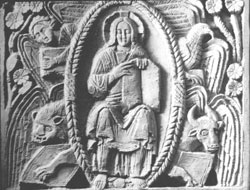 Benedictine abbot and advisor to Charlemagne. He was raised in the court of Emperor Charlemagne, and studied under the great English scholar, Alcuin. Receiving minor orders, Angilbert accompanied King Pepin to Italy in 782. Returning to the court, he became known as "Homer" because of his literary and language skills. He also served as an envoy of the court to the pope. In 790, Angilbert was named the abbot of Saint-Riquier in Picardy, France. Angilbert either rebuilt or restored the abbey and endowed it with two hundred books. In the year 800, Charlemagne came to visit him. Angilbert also fathered two children, having had an affair with Bertha, Charlemagne's daughter. Angilbert did penance for this relationship, and Bertha entered a convent. Nithard, a noted historian of the era and Angilbert's son, wrote of the penance's and austerities undertaken. Angilbert died on February 18, 814. Some years after his burial, his body was found to be incorrupt.