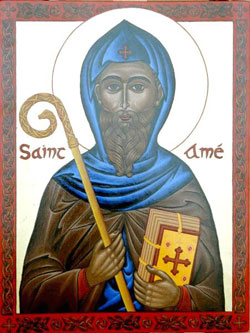 Benedictine abbot and hermit, also called Ame. He was born into a noble family of Grenoble, France, and placed into St. Maurice Abbey as a small child. After becoming a Benedictine monk, Amatus lived as a hermit, going to Luxueil Monastery in 614. St. Eustace, one of his mentors, advised this assignment. While in Luxueil, Amatus converted a Merovingian noble named Romaric. This convert founded a double monastery in 620, and Amatus became its first abbot.