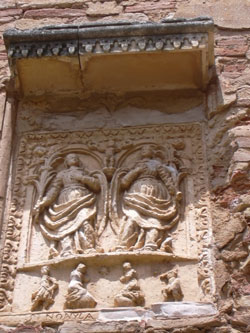 Martyr and confessor, the daughter of a Muslim father and a Christian mother in Huesca, Spain. Alodia and her sister, Nunilo, were caught up in the persecutions conducted by Abdal-Rabman II, the ruler of Cordoba. Alodia and Nunilo dedicated themselves to Christ, despite their father's disapproval, and were arrested. When they refused to deny Christ, they were placed in a brothel and later beheaded.