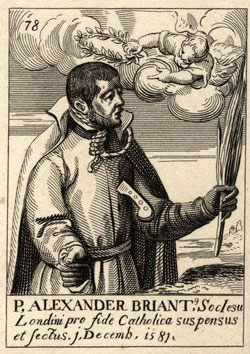 Missionary and martyr, one of the English priests slain in the reign of Queen Elizabeth I. Alexander was born in Somerset, England, circa 1556 , and entered Oxford University at a young age. He was called "the beautiful Oxford youth" because of his handsome appearance and the radiance of his holiness. Alexander converted to Catholicism at Oxford and met Richard Holtby, following Holtby to the English seminary college at Reims, France. He was ordained a priest there on March 29, 1578. Returning to England, Alexander worked in Somerset and was caught up in a search by British authorities in April 1581. Taken to the Tower of London, he was subjected to inhuman tortures but did not reveal the names of other priests. He also wrote to the Jesuit Fathers, asking permission to join. He was accepted. In November 1581, he was condemned to death by an English court. Again Alexander suffered hideous tortures and died on December 1,1581, at the age of twenty-five.