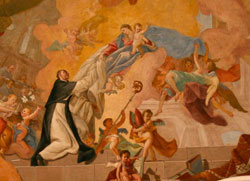 Hermit and co-founder of the great Cistercian Order with Stephen Harding and a monk named Robert. Alberic was a monk near Chatillon-sur-Seine until he joined a group to form a new monastery at Molesmes. Robert served there as abbot, and Alberic was prior. The monks of Molesmes rebelled against the harsh rule instituted there and imprisoned Alberic and forced Robert to leave the monastery. Released, Alberic tried a second time to reform the members, but he was unsuccessful. In 1098, he and twenty-one other monks left Molesmes and established another religious house at Citeaux. Robert was again abbot, and Alberic prior. They were joined this time by Stephen Harding as subprior. Thus was founded the Cistercian Order, one of the most distinguished religious houses in the Church. Robert returned to Molesmes within a few years, restoring the primitive Benedictine rule there. The additional austerities that he introduced into Molesmes gave it a true Cistercian character; however, Stephen Harding is credited with providing the overall Cistercian attributes. Alberic remained at Citeaux, where he died on January 26.