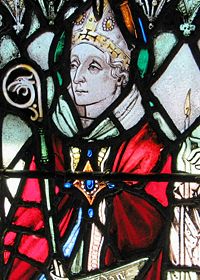 Bishop and missionary, born in Inisbrefny, in County Cavan, circa 550, who is probably to be identified with Aidan. As a small boy he was held as a hostage by AedhAinmire, High King of Ireland, probably to insure the loyalty of his family. Released, Aidan studied at Kilmuine, in Wales, a famed institute of Christian learning conducted by St. David. In 580, he returned to Ireland, going to the coast of Wexford. He served the area and was honored by Bran Dubh at the synod held to celebrate victory over King Aedh. Ferns, the area in which Aidan conducted his priestly ministry, was elevated at this time to the status of a diocese. Aidan was appointed the first bishop of Ferns and became Ard-Escops or Chief bishop of the region. In time he was called Mogue, "the beloved Aidan." The episcopal seat is no longer in Ferns but in Enniscarthy, where a cathedral was dedicated to Aidan.