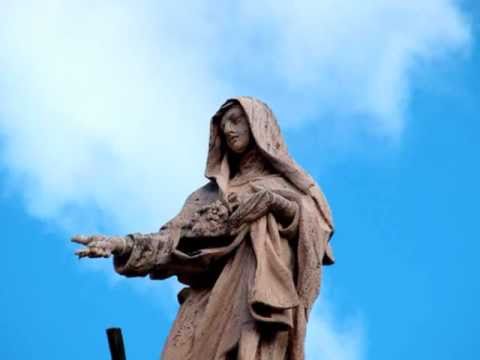 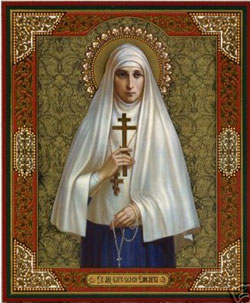 Elizabeth was a Spanish princess who was given in marriage to King Denis of Portugal at the age of twelve. She was very beautiful and very lovable. She was also very devout, and went to Mass every day. Elizabeth was a holy wife, but although her husband was fond of her at first, he soon began to cause her great suffering. Though a good ruler, he did not imitate his wife's love of prayer and other virtues. In fact, his sins of impurity gave great scandle to the people.

Later, to make matters worse, the King believed a lie told about Elizabeth and one of her pages by another page, who was jealous of his companion. In great anger the King ordered the one he believed guilty, to be sent to a lime-burner. The lime-burner was commanded to throw into his furnace the first page who came. The good page set out obediently, not knowing death was waiting for him. On his way he stopped for Mass, since he had the habit of going daily. The first Mass had begun, so he stayed for a second one. In the meantime, the King sent the wicked page to the lime-burner to find out if the other had been killed. And so it was this page who was thrown into the furnace! When the King learned what had happened, he realized that God had saved the good page, punished the liar, and proven Queen Elizabeth to be innocent.

This amazing event helped greatly to make the King live better. He apologized to his wife in front of everyone and began to have a great respect for her. In his last sickness, she never left his side, except for Mass, until he died a holy death. St. Elizabeth lived for eleven more years, doing even greater charity and penance. She was a wonderful model of kindness toward the poor and a successful peacemaker between members of her own family and between nations.