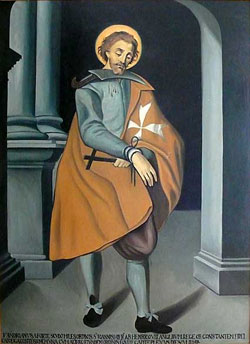 Martyr who opposed the divorce of King Henry VIII of England from Catherine. A cousin of Anne Boleyn, Adrian was born in Punsborne, England, and was married twice. When his first wife Anne Stonor died in 1499, Adrian raised their two daughters. Twelve years later he married Anne Rede, who gave him three sons. A Knight of the Bath and a justice of the peace for Oxford, Adrian was a Dominican tertiary. Although related to Anne Boleyn, he opposed her marriage to the king and was arrested in 1534 for a short time. In 1539, when he refused to take the Oath of Supremacy supporting Henry VIII' s separation for Rome, Adrian was placed in the Tower of London. Permitted no trial and condemned by Parliament, Adrian was beheaded along with Thomas Dinglay on July 8 or 9.