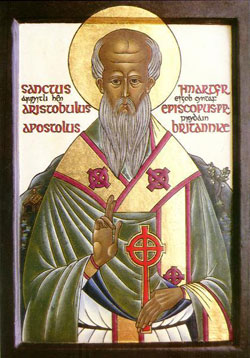 An archbishop and scholar, Ado was born in Sens and educated at the Benedictine abbey of Ferrieres. Abbot Lupus Servatus, an outstanding humanist of the time, trained Ado, and was impressed with the obvious holiness of the young man. A noble by birth, Ado renounced his inheritance and became a Benedictine, in time assigned to the monastery of Prum, near Trier, Germany. Ado's holiness made him enemies, and he was forced to leave Prum. He went to Rome on a pilgrimage and remained there for two years. He then went to Ravenna, where he found an old copy of the Roman Martyrology. Using this, Ado wrote a new version, published in 858. In Lyons, Ado was welcomed by St. Remigius, the archbishop. He served as a pastor in Lyons until 860, when he became the archbishop of Vienne, appointed by Pope Nicholas I. Ado reformed the clergy in Vienne and wrote the lives of St. Desiderius and St. Theuderis. He also opposed the actions of Lothair II, the king of Lorraine, who tried to set aside his lawful wife to marry his mistress. Lothair bribed officials to get a divorce from his queen, Theutberga, but was undone when Ado went to Rome and denounced the plot to the pope. Ado remained in Vienne until his death in 875.