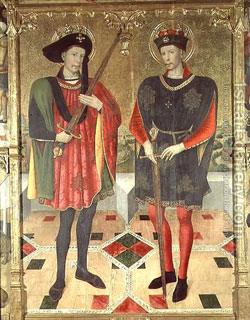 A Persian nobleman who suffered martyrdom with his companion, St. Sennen. Abdon, also called Abdo or Abdus in some lists, is recorded in the Acta of the saints dating to the ninth century, but he and St. Sennen were venerated as early as the third century. The martyrs were exposed to persecutions in the reign of Emperor Diocletian and were carried in chains to Rome. There, they were put in an arena with wild animals but remained unharmed as the animals refused to slay them. Gladiators were sent in to kill them as a last resort. Abdon's body and that of his companion were buried in the Pontian cemetery near the gates of Rome; however, the cities of Florence and Soissons also claim to possess their remains.
Continue reading about St. Abdon