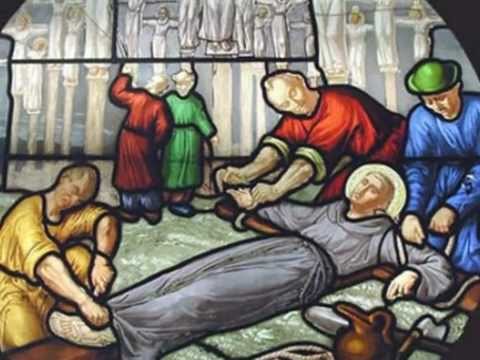 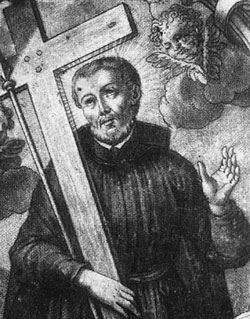 Paul was the son of a Japanese military leader. He was born at Tounucumada, Japan, was educated at the Jesuit college of Anziquiama, joined the Jesuits in 1580, and became known for his eloquent preaching. He was crucified on Februay 5 with twenty-five other Catholics during the persecution of Christians under the Taiko, Toyotomi Hideyoshi, ruler of Japan in the name of the emperor. Among the Japanese layment who suffered the same fate were: Francis, a carpenter who was arrested while watching the executions and then crucified; Gabriel, the nineteen year old son of the Franciscan's porter; Leo Kinuya, a twenty-eight year old carpenter from Miyako; Diego Kisai (or Kizayemon), temporal coadjutor of the Jesuits; Joachim Sakakibara, cook for the Franciscans at Osaka; Peter Sukejiro, sent by a Jesuit priest to help the prisoners, who was then arrested; Cosmas Takeya from Owari, who had preached in Osaka; and Ventura from Miyako, who had been baptized by the Jesuits, gave up his Catholicism on the death of his father, became a bonze, and was brought back to the Church by the Franciscans. They were all canonized as the Martyrs of Japan in 1862. Their feast day is February 6th. 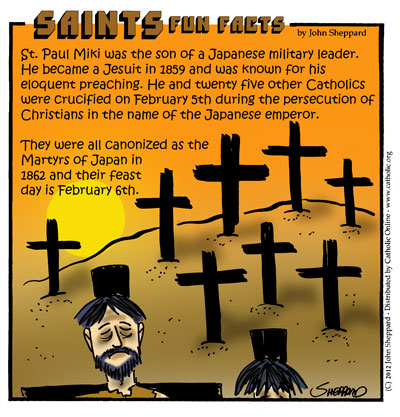