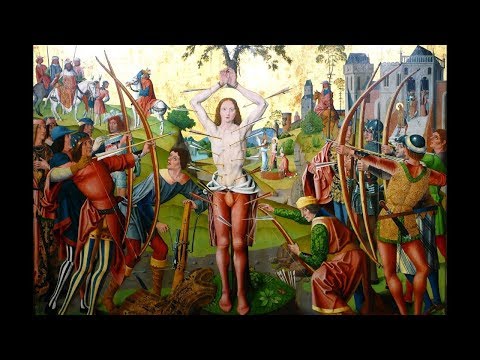 Feastday: January 20
Patron: of soldiers, athletes, and those who desire a saintly death
Death: 288 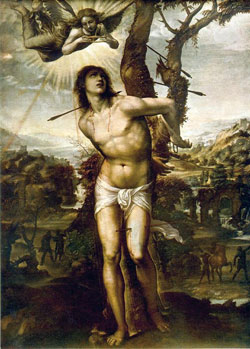 Nothing is known about St. Sebastian's youth other than the fact he may have come from southern France and he was educated in Milan. He joined the Roman Army in 283 AD, ostensibly to be of service to other Christians who were being persecuted by the Romans. St. Sebastian distinguished himself and for his excellent service, he was promoted to serve in the Praetorian Guard to protect Emperor Diocletian.

While serving as a Praetorian Guard, Marcus and Marcellian, twin brothers, were imprisoned for refusing to make public sacrifices to the Roman gods. The brothers were deacons of the Christian Church. During their imprisonment, their parents visited them to implore them to renounce Christianity. However, St. Sebastian convinced both parents to convert to Christianity. St. Sebastian also converted several other prominent individuals, including the local prefect.

This led to his discovery and he was reported as a Christian to Emperor Diocletian in 286. The Emperor, who was already infamous for ordering the deaths of hundreds of Christians, scolded Sebastian and ordered him to be killed by having him tied to a stake on a training field and used as target practice.

Archers riddled his body with arrows, his body was described as, "full of arrows as an urchin." Believed to be dead, the archers left his body for retrieval and burial. He was recovered by Irene of Rome, whose Christian husband was a servant to Diocletian and also martyred. Irene discovered that Sebastian was still living and she hid him and nursed him back to health.

Once well, Sebastian went in search of Diocletian to surprise him. He managed to catch Diocletian by a stairwell and proceeded to criticize him loudly and publically for his persecution of the Christians. Diocletian, surprised that Sebastian was still alive, was immediately taken aback, but recovered his composure. This time, he would not permit Sebastian to escape with his life. He ordered his former guard to be beaten to death with clubs, then thrown into the sewers.

His body was recovered by a Christian woman, named Lucina, and she secretly buried him in the catacombs beneath Rome.

Nearly 80 years after his death, around 367, his remains were moved to a basilica in Rome, built by Pope Damasus I. His body, or at least some relics from his body were reportedly removed and shared with a community of monks in France. His cranium was sent to a German monastery where it was placed in a special silver case in 934. The relic remains in its case today in a special reliquary in Ebersberg.

St. Sebastian was commonly invoked as a protector against the plague. According to historical records, he defended the city of Rome against the plague in 680. His association with the plague could be because he survived being shot full of arrows and in pagan belief, pestilence was delivered by arrows shot by the gods above. Even Christian Romans would appreciate this symbolism. That symbolism is even captured in artwork as late as the Renaissance, where artists painted plague victims with black arrows in their body.

In artwork, St. Sebastian is depicted with arrows shot into his body, often tied to a post or a tree. His second execution is virtually never depicted.

St. Sebastian is the patron saint of soldiers, athletes, and those who desire a saintly death. 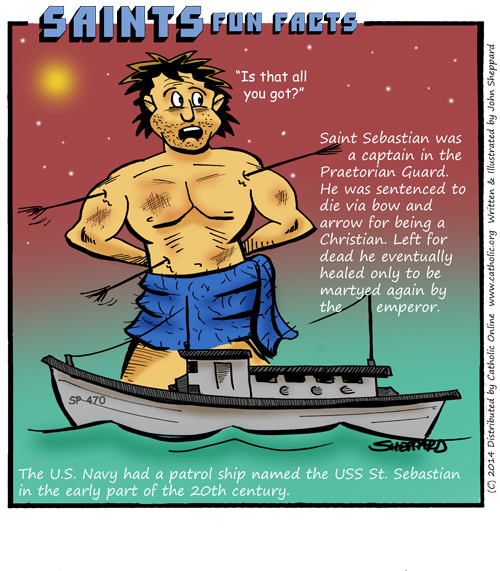