A burger-flipping robot has started work in California, likely to be the first of many millions to come. The machines will reduce the need for people to work grills at fast food restaurants. 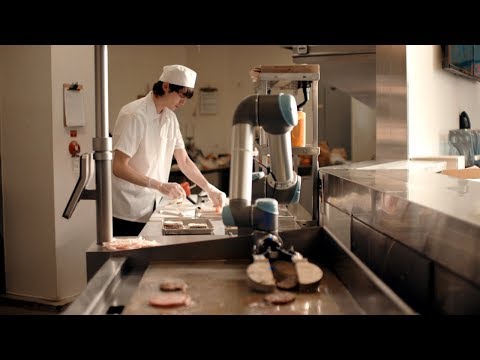 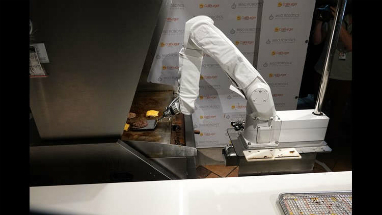 Flippy is the first of hundreds of burger flipping robots, set to be rolled out over the next couple years.

LOS ANGELES, CA (California Network) - A burger-flipping robot has started work at a California burger chain. The robot's arrival is the next step in the automation of restaurants and is a sign of a trend which is spreading globally.

Caliburger, a California-based hamburger chain, has introduced 'Flippy' to the world. Flippy is the name of their new burger flipping machine at their Pasadena location. The machine started work on Monday.

A person puts prepared, seasoned patties into a tray and Flippy goes to work, placing the patties on a griddle as needed. Flippy monitors the temperature of each and uses the information to know when to flip the burger. When each one is finished, a person applies toppings and prepares the burger for the customer.

Flippy can cook about 2,000 burgers per day. Flippy does not get tired, does not need breaks, does not eat lunch, get sick, or ask for time off or a raise. However, Flippy is more expensive than hiring workers. Each machine costs $100,000, which is significantly more than hiring minimum wage workers to do the same job. So why employ a robot if the robot costs more than the worker?

If an owner employs workers at $15/hr for 12 hours per day, 365 days per year, the gross wages will come to $65,700. The cost for the employer will be higher, due to the employer's share of state and federal taxes, but ultimately Flippy costs more at $100,000. Flippy will pay for itself after a year-and-a-half or less, assuming the robot continues operating for that long without the need for replacement or major repair.

The reason offered by Calibuger is that it is difficult to keep burger-flippers employed. The chain does not intend to replace employees with robots but instead seeks to pair humans and robots to maximize efficiency and improve the customer experience.

Public reaction is mixed with some praising, others criticizing the development. Critics contend that robots like automated kiosks, checkstands, and burger flipping machines will take away jobs. The fear is that jobs will disappear, adding millions of people to welfare rolls.

However, many of these same people are already on welfare, despite working full time. And turnover is high for many low-wage occupations because the nature of the work is drudgery. It is both physically and psychologically difficult.

Humans are naturally inclined to work, it is hardwired into our very DNA, but they need that work to be fulfilling to some degree. Pay does not matter as much as many think. If you were to pay a worker $15/hr to simply stand and stare at a wall, performing no work, they would quit the job within a few days because it would feel like torture.

People also need to feel productive. Productivity, not pay, is the basis of morale in the workplace.

Unfortunately, many jobs do not offer much in the way of mental challenge or productivity. Low wage jobs are often paid poorly because they are easily replaced, require minimal skills, and taken individually, do not produce much value for employers. Therefore, it makes sense to automate these jobs.

Thus begins the robot revolution. Robots are now leaving the industrial workplace and entering the mainstream. While they are seen as a publicity stunt at present, they are coming in greater numbers, starting now.

They will costs jobs, but they will also create new jobs. We need to revamp our educational system to prepare people for these new jobs, which include servicing and working in concert with these new machines.

The fifth industrial revolution has entered the mainstream, and it will change the world over the next few years to come.