PEW RESEARCH - Experts predict the death of capitalism is near

Free World Class Education
FREE Catholic Classes
This isn't a communist fantasy, but the natural end of capitalism itself.

The Pew Research Center has just published a major report on the future of work, jobs, and capitalism in the face of new technology and automation. The report took a survey of experts in the field including scholars and professionals to find their views about the future. The survey found a broad consensus that people will struggle to keep up with changes, that jobs will evaporate, and that capitalism itself is in danger of obsolescence. 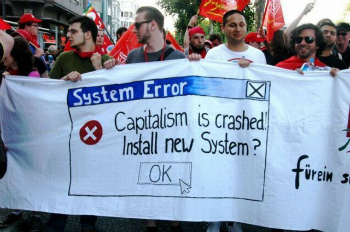 Capitalism is a system whereby people freely exchange goods and services they value via a medium of exchange (money) to achieve their goals. But what happens when billions of people can no longer offer anything of value to the market?

LOS ANGELES, CA (California Network) -- This time, the future is not like the past. Historically, when industrial revolutions have occurred, they have killed industries only to create new ones. The First Industrial Revolution killed farm labor but created factories. The steam engine killed some factory jobs but created the railroad. Generally, at the end of it all, people were better off than ever before, making the short-term sacrifices worthwhile from a macroeconomic perspective.

Now, the world stands on the cusp of the Fifth Industrial Revolution, which is already underway. Within less than a decade, the world will change in ways we struggle to imagine. The greatest change is the development of sophisticated artificial intelligence (AI) and robots.

Historically, human brains were required to operate and oversee everything. Only a human brain has been capable of diagnosing, repairing, teaching, adapting, and synthesizing complex, abstract ideas. Art has thus far only come from the human brain.

That's all about to change.

By the end of the Fifth Industrial Revolution, robots will fix robots, and AI will put millions of people out of work. And it isn't just workers in fast food and transportation who face displacement. Pew posted a list of the jobs that are likely to disappear as automation grows:

Automation, robotics, algorithms and artificial intelligence (AI) in recent times have shown they can do equal or sometimes even better work than humans who are dermatologists, insurance claims adjusters, lawyers, seismic testers in oil fields, sports journalists and financial reporters, crew members on guided-missile destroyers, hiring managers, psychological testers, retail salespeople, and border patrol agents. Moreover, there is growing anxiety that technology developments on the near horizon will crush the jobs of the millions who drive cars and trucks, analyze medical tests and data, perform middle management chores, dispense medicine, trade stocks and evaluate markets, fight on battlefields, perform government functions, and even replace those who program software -- that is, the creators of algorithms.

There's a big catch. As these jobs disappear, precious few will be created to replace them.

Training will help. New educational systems, reforms in how we teach children will all help a little. But the world now moves faster than most bureaucracy can keep up. The infrastructure we rely on to teach and prepare people will always be stuck, perpetually behind the cutting edge. It already is now, but the problem will become much more pronounced.

The people who will succeed will be the few who can adapt quickly. They may be able to pay for cutting edge training, or they could have a natural aptitude. But their numbers will be few.

Once again, many expert respondents to the survey warned that in the future, there would be many fewer jobs available. Even the new jobs that are created by new technology will be taken by AI and robots.

As automation grows, the value of labor declines. Opponents of minimum wage increases like to point to self-help kiosks in fast food restaurants, suggesting the kiosks are a reaction to the implied unreasonable demand for a living wage in exchange for full-time employment. This is a lie. The kiosks were in development long before the movement to raise worker's wages became mainstream. And $15 or not, the kiosks were coming anyway because kiosks work virtually for free. Even a dollar an hour is too high a wage versus a kiosk.

Labor is losing its value and while minimum wage laws can forestall the inevitable for a short time, the labor market is on the verge of collapse. The owners and producers will be the winners, and the workers the losers.

The result will be excellent for investors and owners, and for those who can maintain a decent income. A lot of things will become even cheaper, even though wages across the board will stagnate and eventually fall.

How does this endanger capitalism? Several respondents expressed concern that capitalism could be endangered because capitalism relies on the exchange of value. Simply explained, a worker trades their labor, which has value, to create a product or service on behalf of the owner. The owner sells the product of the labor, and after subtracting costs shares the profit with the worker in the form of wages. Commonly, the buyer of the product is another laborer, who uses their wages to purchase the product.

What happens when there are no more workers? No workers mean no wages. Owners will save a lot on labor costs, but who can afford to buy their product? Owners can offer products more cheaply, but even a dollar is too high a price when your income is zero.

But wait, isn't capitalism merely a description of how economic forces work, with nature correcting itself over time? Yes and no. While capitalism does an excellent job explaining how economic forces work, it is also a system of free exchange that assumed both parties have something to exchange. The problem is, the people who would exchange their labor for wages will be obsolete .

Some have suggested taxing wealth more sharply and redistributing the income to the people at the bottom. However, the bottom will become very wide, then what? Should the size of the population be reduced? And how is this ethically possible by any moral means?

It is impossible to stop progress. The future is a wonderful place for people who own. But for the workers, the future is a place of great uncertainty. Change is the only guarantee.

You can view the full article from Pew here.