What will World War 3 look like? How do I survive it?

With global tensions reaching new heights, talk about World War 3 has surged. Search traffic for the term is spiking. Preppers are buying out emergency supplies from brick-and-mortar stores and online. Is the world on the brink of war? And what can we expect if it happens? According to the experts, World War 3 will come suddenly, and it will not be anything like we expect. 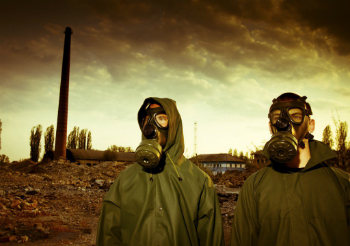 What will World War 3 look like, and how do we prepare?

LOS ANGELES, CA (California Network) -- Interest in World War 3 has spiked by a factor of 11 times since March 26, according to Google Trends, which analyzes search traffic. Most of the traffic is coming from the USA, Canada, UK, Australia, Pakistan, and South Africa. Traffic for the term is also up in Russia, Brazil, and Argentina.

The concern has people prepping like it is 1962, which is the last time popular concern over nuclear war reached a fever pitch. Indeed, such a war was only avoided by the steadfast refusal of one Soviet submarine officer under depth charge attack by a U.S. destroyer. That man's name was Vasili Arkhipov. What happens if there is no such person with a cool head in the months to come?

World War 3 remains as unlikely as ever, despite the fears stoked by the media and fake news sites. Neither Russia, nor China, North Korea or Iran, or any other nation is prepared for World War 3. The United States is the most prepared nation, but after nearly a decade of atrophy, the U.S. military is yet unready for a global conflict.

Knowing this, no commander-in-chief, will willingly give an order to start a global conflict.

Nor do countries like China or Russia want war with the United States. China is sustained by American consumerism. Russia simply doesn't have the military power to sustain itself at sea or in the air against the U.S. Navy and Air Force. Manpower is good for defensive operations, but no nation has the ability to invade any of the others.

Given these realities, war is not likely to come about as the result of deliberate political engineering. But accidental war? That's quite possible.

An accidental war simply requires a miscalculation that escalates faster than political leaders can stop it. The most obvious hotspot seems to be North Korea. If China cannot convince North Korea to abandon its nuclear ambitions, the United States will be forced to attack to destroy their nuclear weapons capability. A nuclear armed North Korea with the ability to hit the USA is unacceptable.

How the world responds to the inevitable American strike is what will make the difference.

It is possible that North Korea develops an insurance plan to strike back against South Korea. It could be as simple as a miniaturized nuclear device, smuggled into South Korea and detonated in Seoul. At that moment, nobody will be certain how the weapons was delivered. Perhaps by rocket or artillery shell, the unknown factor will prove decisive. The fear of more strikes will be overwhelming for commanders.

The destruction of the South Korean capital therefore triggers a failsafe strike against North Korea, with a nuclear missile submarine ordered to sortie half-a-dozen ballistic missiles against major targets in North Korea. In just fifteen minutes, it is all over for the North.

As the world begins to comprehend the scale of the devastation on the Korean peninsula, a relative calm spreads. A massive tragedy has occurred, but at least it's over, or so billions of people assume.

Later that day, China retaliates for the destruction of their ally. Power shuts off across the U.S., infrastructure also shuts down. Dams close their spillways, then shut down. Water pumping stations burn out and quit. Cell phones stop working.

The entire nation goes dark and silent, plunged back to the 19th century within the space of a few hours or less.

Without any source for information, rumors spread. Most people assume their problems are local. It will take hours for people to learn that it is much more widespread. A few people with generators, radios, and emergency equipment will form an ad hoc communications networks. By that means, news will spread, but very slowly, and very inaccurately.

After a few days, food and water begins to run out for hundreds of millions of people. Looting and rioting erupt. Police cannot contain the hungry mobs. Police and the mustered fragments of national guard and military units attempt to quell violence by firing on civilians, and martial law in enforced in places where it can be. But people are thirsty and hungry, and their fear of starvation often eclipses the fear of bullets.

In the worst-case scenario, the nation takes months to rebuild itself, aided chiefly by its neighbors who provide all manner of assistance. Eventually, authorities learn China initiated a massive cyber-attack on the U.S., which knocked the nation offline. Hunger, violence, and disease, and in a few cases catastrophe, results in the deaths perhaps hundreds of thousands of people.

The question then becomes, how does the U.S. retaliate? The military, largely untouched by the cyber-attack, may stage limited strikes against China. Both sides would trade blows, but American technological superiority would win the day. Do the Chinese deploy their nuclear arsenal to stop the American fleets? Does the U.S. then reply in kind?

As the scenario delves further into speculation, anything becomes possible, to the point of global annihilation.

Cyber-attacks such as these are certainly possible. And China, which manufactures most of the world's electronics, is perfectly situated to plant in every device the ability to hack and control it. We assume such hacks could be detected, but this might not be the case.

Cyber-warfare is the next equalizer. Nuclear weapons are eschewed because proliferation is resisted by the world community. Any nation that now seeks nuclear weapons is quickly ostracized. They are expensive, and they can only be used to destroy.

But hacking is cheap and relatively easy. Hackers can work from anywhere. The effect of their work is instant, and it can be deadly, or not depending on the attacker's goal. Certainly, killing infrastructure on a national scale would be nearly as destructive as a nuclear attack. Rioters and angry mobs of thirsty, starving people can destroy a city as thoroughly as a nuclear weapon.

The best defense in such a case is to be prepared, and to encourage others to also be prepared. You don't have to dig a bunker to be prepared. Anyone can take basic measures, even if they live in an apartment complex. In addition to a supply of drinking water, some staple foods should be kept on hand. Beans, rice, canned foods are excellent to keep stored in a durable bin. Foods should be edible out of the can if possible, or require minimal prep. You cannot assume cooking heat will always be available.

Meals Ready to Eat (MREs), which are military rations, are often sold in survival stores as well as online. Just one has enough calories to last for a full day. A small stockpile of these can keep a person fed for a long time. There are also emergency rations designed to provide calories and basic nutrition for an extended period.

A generator or hand-cranked radios are useful, as are a supply of batteries and other household essentials. Basic medicines, especially prescription meds are important.

Surviving cyber warfare is easy if people are prepared to go for an extended period without modern conveniences and they resist panic and herd mentalities.

By banding together and cooperating we can survive anything. Whatever happens, the world will recover. The only question is if we will be alive to see it, and that depends on our attitude. Our common patriotism, our faith and our belief in one another will make all the difference.

In the meantime, let us pray cooler heads prevail and none of this comes to pass.