While most Catholic mothers pray for their teenage sons, Antonia Acutis has the unique ability to pray to hers, the soon-to-be-beatified Italian teenager Carlo Acutis. 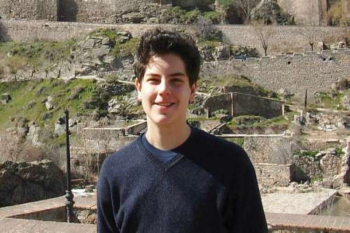 (CNA) - Carlo will be beatified October 10 in Assisi, Italy. His canonization cause has been popularized not only due to his young testament to holiness before he died of leukemia at age 15, but also because of his adeptness with technology. At age 14, he designed a website to share his great love for the Eucharist.

At first, his mother did not know what to do with such an intelligent and fervent young boy.

"I was not the ideal model of a Catholic mother," Antonia told CNA.

Like many, Antonia's faith was formed by a culture of Catholicism. But Carlo's example challenged her, and she reached out to a faithful friend for advice. Antonia's friend connected her with a priest, who encouraged her to take classes to further her Catholic faith.

Before that, she "was quite ignorant in the faith things," she told CNA.

Through the working of a priest she met through her classes, Carlo was able to receive his first Holy Communion at just seven years old-- after which he never missed daily Mass, even while their family traveled.

Carlo's love for the Eucharist formed his mother's own devotion to the Sacrament.

"The source of the sanctity of Carlo was the Eucharist. He used to say the Eucharist is my highway to heaven," said Antonia.

Nicola Gori, the postulator of Acutis' cause for sainthood, said that Carlos loved God in such a way that invited others, especially those closest to him, to share in the Eucharistic feast.

"Think, he managed to drag his relatives, his parents to Mass every day. It was not the other way around; it was not his parents bringing the little boy to Mass, but it was he who managed to get himself to Mass and to convince others to receive Communion daily," Gori told EWTN News.

Before Carlo, Antonia said that she went to Mass only for her first Holy Communion, confirmation, and marriage.

But by Carlo's exemplary love for the Eucharist, "I started to go to Mass again," Antonia said. "And this was actually because of Carlo. Carlo for me was a sort of little savior."

Since Carlo's death of leukemia in 2006, Antonia has more deeply realized how special of a child he was.

Although Carlo played on a Playstation, Antonia never had to reprimand him for spending too much time playing video games.

"He was also a normal child!" Antonia said. "He used to play with the Playstation. But he forced himself to play once a week only for one hour because he didn't want to become a slave to this technological games. He wanted to be free."

Exactly four years after Carlo's death, Antonia gave birth to twins-- a miracle she attributes to Carlo's intercession. The twins were born into the world on the anniversary of the day Carlo left it.

The twins have revealed to Antonia just how extraordinary Carlo was as a child.

"Sometimes I have to say 'don't do this', 'don't do that'... I mean, they are good children because they pray the rosary each day, they go to Mass because of the example of Carlo. But they are not like Carlo. There is really a very, very big difference," she said.

Ironically, the faith that Carlo kindled in his mother was the very thing that helped her make sense of his death.

"Jesus was preparing me and my husband because we got closer to the faith and the sacramental life and he prepared us for this moment for the death of Carlo. Without the faith, I don't know how we could accept the death of a child - an only child," said Antonia.

After his death, Carlo's example in holiness quickly bore much fruit. His mother said that people who knew Carlo began praying to him right after he died, and crowds who had been touched by Carlo's life flooded the funeral.

Pope Francis named Carlo venerable in July 2019, and his beatification ceremony, originally planned for the spring of 2020, was postponed until October due to the coronavirus pandemic.

Gori said that the ceremony was postponed especially because so many young people hoped to attend. Carlo, along with Saint Pier Giorgio Frassati or Blessed Chiara Luce Badano, have become beacons of holiness for modern youth.

"Because Carlo's beatification will surely be a celebration for all young people, and since Carlo is known in many countries, not to say universally known, it would be a shame to be able to do it only with a few people," Gori said.

Antonia hopes that the ceremony that declares her son on the path to canonization will occur within her lifetime.

"I am confident that it won't be so far away," she said.