The writings of newly-canonized St. John Henry Newman offer important reflections for contemporary society on freedom of conscience and the duty to search for truth, said a leading figure in international religious freedom. 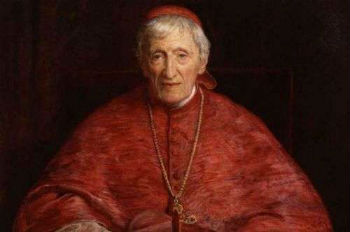 Rome, Italy, (CNA) - The writings of newly-canonized St. John Henry Newman offer important reflections for contemporary society on freedom of conscience and the duty to search for truth, said a leading figure in international religious freedom.

Farr, who served as the inaugural director of the U.S. State Department's international religious freedom office in the early 2000s, spoke at a symposium hosted by the Thomistic Institute at the Angelicum University in Rome earlier this month. The event celebrated Cardinal Newman's canonization on Oct. 13.

Newman was a 19th century theologian, poet, Catholic priest and cardinal. Born in 1801, he was before his conversion a well-known and well-respected Oxford academic, Anglican preacher, and public intellectual.

Farr said that Newman's well-known phrase, "Conscience has rights because it has duties," offers an important reminder that we are obliged to form our consciences in truth, recognizing that "our freedom does not give us a moral right to do what is wrong."

Dignitatis Humanae affirms the right to religious freedom, a freedom from coercion in matters of conscience, Farr said.

He quoted from the document, "God calls men to serve Him in spirit and in truth, hence they are bound in conscience but they stand under no compulsion. God has regard for the dignity of the human person whom He Himself created and man is to be guided by his own judgment and he is to enjoy freedom."

But while human beings are obliged to follow their consciences, they are also bound to obey God, Farr said.

"An erring conscience that results from our failure to ensure it is ordered to the truth leads to moral culpability," he remarked. "Willful pursuit of the wrong could lead one into grave sin. A man could follow an ill-formed conscience straight into hell."

For this reason, Dignitatis Humanae also stresses the Church's right - and duty - to publicly teach what it holds to be true about freedom, justice, nature and Christ, he said.

Newman well understood the importance of ordering conscience toward truth, as given by God to the Church through the Magisterium, Farr said.

The saint once wrote, "[I]n this age...the very right and freedom of conscience [is seen as the right] to dispense with conscience, to ignore a Lawgiver and Judge, to be independent of unseen obligations." Conscience, he warned, was being replaced with "self-will."

In his warnings on conscience, Newman proved to be prophetic, Farr said. Today, Western culture distorts the view of conscience to an even greater degree than in Newman's time, so that it is no longer oriented toward God, but toward self.

"For many, the obligation to follow one's conscience has been embraced, but fidelity to truth has been set aside," Farr said.

This false understanding of "freedom of conscience" has contributed to an atheism and rejection of natural law, he continued.

"This counterfeit view has encouraged, within the Church and without, deep confusion regarding the nature of man and woman as created by God; the beautiful truths about marriage, the family, and human sexuality; and the necessity of religious freedom for all persons and all societies."

Both modern society and the Church have been harmed by this false view of conscience, Farr said, and both would do well to be attentive to the warnings issued by Newman more than a century ago.

"The errors of our age, far more pervasive than the age of Newman, today place a greater responsibility on the faithful, clergy and lay, to teach and witness these truths," he said.

"Together, Newman and Dignitatis can help us resist the erroneous notion of the 'free' conscience pointed inward to self and isolated from God and nature, rather than outward to God, who, more intimate to self and nature than anyone or anything, is the only guarantor of true freedom."