A personal encounter with Mother Alphonse Marie Eppinger inspired "conversions which were far more miraculous than the raising of the dead," recounted her spiritual director, Father Jean-David Reichard. The nineteenth century French mystic and religious founder was beatified this week in her native Strasbourg after a miraculous physical healing through her intercession was confirmed. 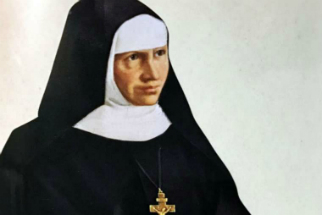 Strasbourg, France (CNA) - Cardinal Giovanni Angelo Becciu, prefect of the Congregation for Causes of the Saints, celebrated the beatification Mass in the Cathedral of Notre Dame on Sept. 9 in Strasbourg, France.

Mother Alphonse Marie had "the gift of seeing people, what is in their souls," wrote Abbe GlĂ¶ckler, who knew Eppinger personally and later wrote her biography.

"She had a right word and advice for everyone. God gifted her with a good mind and right judgment. Many left her with the decision to change their lives and to walk the right path."

Eppinger was able to "scrutinize human hearts" and "reveal things that were hidden," using these spiritual gifts to advise the priests who would "visit her in abundant numbers" seeking counsel.

"God gave her a specific commission for priests," GlĂ¶ckler continued, "She told them about dignity and the grandeur of the priesthood.  She prayed a lot for priests, the Holy Father, and the Diocesan Bishop." Eppinger also composed many several prayers for confessors.

Speaking at the Mass of beatification, Cardinal Becciu called the occasion a "providential opportunity to rediscover, 150 years after her death,  ... the testimony of an authentic Christian life and a deep spirituality."

The eldest of eleven children, Elizabeth Eppinger, was born into a peasant family on Sept. 9, 1814, in Niederbronn, France.

Her devotion to Christ's passion stemmed from an episode in her childhood, which Cardinal Becciu recounted in his homily:

"As a child - when she was still called Elizabeth - one day on the way to a station of the Stations of the Cross, she asked her mother, 'Why did they crucify Jesus?'"

"'My little one, he was killed because of our sins," he replied her mother."

"'Well, I do not want to offend him anymore!'" she replied."

Eppinger's devotion deepened through her experience of suffering through a serious illness with which she struggled intermittently throughout her life. It kept her bedridden for years at a time, prayerfully "immersed in the mystery of the cross."

It was during her illness that Eppinger received her first vision of Christ and that her mystical gifts became well known.

At the request of her bishop, Eppinger founded the Congregation of the Sisters of the Most Holy Saviour in 1848, taking the religious name Sister Alphonse Marie, in honor of her great devotion to Saint Alphonsus de Liguori, whom she made patron of the new congregation.

She asked her sisters to meditate daily on the passion of Christ, and she encouraged devotion to Eucharistic adoration. In addition to their devotions, the sisters also aided the sick during epidemics, including a cholera outbreak in 1854.

Mother Alphonse Marie died in 1867. Ten years after her death, the congregation she founded had grown to include 550 sisters in 88 religious houses throughout Europe. Today the sisters are present  in 68 dioceses accross 16 countries, and they continue to serve others through the ministries of health care, social services and education

"Let us thank God for this courageous and wise woman who, in suffering, in silence, and in prayer, witnessed the love of God especially to those who were sick in body and in spirit."