St Irenaeus of Lyon Teaches Us How to Know, Love and Serve God

This great defender of the faith insisted on the central claim of Christianity: God can be known and loved-indeed, that is why He came into our midst in the person of His Son; so that through a  relationship with Jesus Christ, man could participate in the very inner life of the Trinity. In that participation we are transformed by grace. 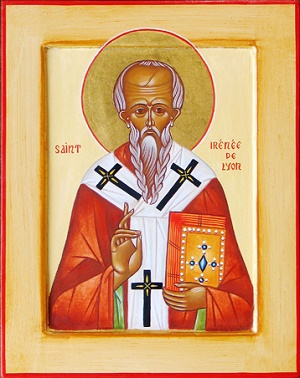 Irenaeus of Lyon wrote these words - The glory of God gives life; those who see God receive life. For this reason, God-who cannot be grasped, comprehended, or seen-allows Himself to be seen, comprehended, and grasped by men, that He may give life to those who see and receive Him. It is impossible to live without life, and the actualization of life comes from participation in God, while participation in God is to see God and enjoy His goodness.

CHESAPEAKE, VA (Catholic Online) - Born in Asia Minor in 130 A.D., Irenaeus was educated in Smyrna where he learned the Christian faith from Polycarp.

Polycarp was a friend of John, the beloved disciple, the author of the Gospel that bears his name.

He learned it from the One who proclaimed, lived, and was the Good News - Jesus Christ.

Polycarp sent his young disciple on a missionary journey to Lyons, France, to spread the message of Love Incarnate.

Irenaeus was later ordained to the priesthood under the Bishop of Lyons, St. Pothinus, and became one of the founders of the Church in that Nation. He succeeded Pothinus as Bishop in 178.

Filled with fervor for the fulness of the l faith handed down from the Apostles, Irenaeus vigorously defended the God's revelation against the early aberrations of the Gnostics (who warped the message into a hidden secret for only a few); and the Montanists (who disdained the body, all matter, and misunderstood the implications of the Word becoming flesh).

His most famous work, preserved to this day, is entitled "Treatise against Heresies". It not only refutes the errant teachings of the those who departed from the Christian faith as handed down from Jesus and the Apostles, it proclaimed the full beauty of that faith for all who continue to walk in the way of Jesus Christ.

That includes you and me.

The arguments contained in this masterpiece are still being made by the Church he served as She faces contemporary efforts to undermine and obscure the full promise of the Christian faith-the total transformation of humanity in and through Jesus Christ.

This great defender of the faith insisted on the central claim of Christianity: God can be known and loved-indeed, that is why He came into our midst in the person of His Son; so that through a relationship with Jesus Christ, man could participate in the very inner life of the Trinity. In that participation we are transformed by grace.

"The glory of God gives life; those who see God receive life. For this reason, God-who cannot be grasped, comprehended, or seen-allows Himself to be seen, comprehended, and grasped by men, that He may give life to those who see and receive Him. It is impossible to live without life, and the actualization of life comes from participation in God, while participation in God is to see God and enjoy His goodness."

This marvelous truth reveals the heart of the meaning and implications of the Incarnation, the central doctrine of the Christian faith. Jesus Christ both fully reveals who God is to man, and who man is now able to become in God.

The words of the Fathers of the Second Vatican Council, the latest ecumenical council of the same Catholic Church which Irenaeus served with such heroism, underscore the profundity of this great truth in the most oft-quoted passage of the pontificate of Saint John Paul II:

The men and women of Irenaeus' age had a difficult time grasping this profound truth.

The men and women of our own time do as well.

That is because they can only be grasped by living faith.

Yet-against extraordinary opposition-he defended, embodied, and witnessed the truth they reveal; bearing as his final witness the shedding of His blood in the year 200 A.D.

That is the message which shook the world of the Apostolic age, and literally transformed it from within. God has revealed Himself fully and completely and can be known and loved.

Do we believe that the very same message will transform the world that Christians face in the Third Christian Millennium? The heart of the Gospel message has not changed. What is needed are messengers for this age.

Men and women who, like Irenaeus of Lyons, live it with heroic virtue, living faith and boldness.

The Gospel of Jesus Christ alone can melt and refashion the hardened hearts of the age in which we now live. To an age now seeking good news, we are called, as was Irenaeus, to proclaim it from the housetops, and offer it as a path to true freedom.

When we do, the Incarnation of Jesus will continue its transforming effects through the words we speak - and the way we live our daily lives in the real world. The Lord will continue his saving, sanctifying and liberating work through us.

I offer below an excerpt from the wonderful writings of this brother in the Lord, this Bishop of our Church, this Hero of the Faith. It addresses how we can come to know God:

Now the Son fulfils the Father's good pleasure: the Father sends, the Son is sent, and he comes. The Father is beyond our sight and comprehension; but he is known by his Word, who tells us of him who surpasses all telling.

The Father's purpose in revealing the Son was to make himself known to us all and so to welcome into eternal rest those who believe in him, establishing them in justice, preserving them from death. To believe in him means to do his will.

All speak of these things in the same language, but they do not believe them in the same way.

But all saw the Father in the Son, for the Father of the Son cannot be seen, but the Son of the Father can be seen. The Son performs everything as a ministry to the Father, from beginning to end, and without the Son no one can know God. The way to know the Father is the Son.

The word "revealed" refers not only to the future - as though the Word began to reveal the Father only when he was born of Mary; it refers equally to all time.

So, there is in all and through all one God the Father, one Word and Son, and one Spirit, and one salvation for all who believe in him.

-----
Deacon Keith A. Fournier is Founder and Chairman of Common Good Foundation and Common Good Alliance. A married Roman Catholic Deacon of the Diocese of Richmond, Virginia, he and his wife Laurine have five grown children and six grandchildren, He serves as the Director of Adult Faith Formation at St. Stephen, Martyr Parish in Chesapeake, VA. He is also a human rights lawyer and public policy advocate who served as the first and founding Executive Director of the American Center for Law and Justice in the nineteen nineties. He has long been active at the intersection of faith and culture and currently serves as Special Counsel to Liberty Counsel. He is also the Editor in Chief of Catholic Online.