St. Catherine of Sienna Calls Each One of Us to Love God Right Where We Are

Catherine understood that the mission field is often found in our own backyard!

While praying at Peter's tomb, she experienced the great weight of the Church fall on her shoulders, and she offered herself and her suffering as a "victim" for the renewal of the Church. On April 29 of that year, around midday, God called her to Himself. Days before her death, she wrote, "If I die, let it be known that I die ... of passion for the Church." Her deathbed prayer is a model of love poured out for all who follow Jesus Christ and desire the healing and unity of the Church in our day. 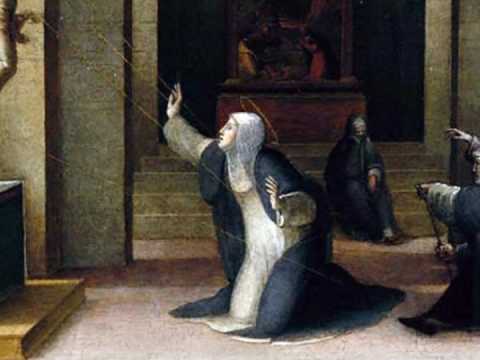 P>CHESAPEAKE, VA (Catholic Online) - "Eternal Trinity, Godhead, mystery deep as the sea, you could give me no greater gift than the gift of yourself. For you are a fire ever burning and never consume, which itself consumes all the selfish love that fills my being." (St. Catherine of Sienna)

These beautiful words are found in the Office of Readings for this Feast. They come from the pen of this strong woman of God who found her strength in a deep communion with God whose Life and death we commemorate today.

Born in 1347, Catherine Benincasa was the twenty-fifth child born to Giacomo and Lapa Benincasa. Her father Giacomo was a wealthy businessman. Her mother, as one can imagine, had her days-and nights-filled with caring for twenty-five children! At the age of six, young Catherine was walking home when she saw Jesus seated in glory.

Accompanying Him were members of the heavenly family-the Church triumphant-Peter, Paul, and John. It was on that day that young Catherine decided to surrender her life to the Lord in prayer and service to the Church.

Catherine's parents wanted her to marry and have the best life that they could provide. At first, they resisted young Catherine's desire to surrender the joys of marriage for her greatest desire, the life of remaining celibate, a life wholly surrendered and consecrated to God and His Church. But, like many parents of saints and heroes of the faith, they began to see the finger of God working in their daughter's life. They could not stand in the way. In fact, they began to pave the way in prayer.

At the age of sixteen, Catherine chose the way of another hero of the faith, Dominic, in responding to the grace of her vocation. He had left a way of life for all who sought to live what the church has called the "evangelical counsels", the Dominican Order. Catherine became a tertiary (lay follower) of the Dominican rule. She embraced a life of poverty, chastity, and obedience.

She first reached out and cared for those whom others avoided in the hospital located in Sienna, her own hometown. She, like so many other saints and heroes throughout the history of the Church, believed that Jesus hid Himself in the face and the wounds of the poor. She preferred the lepers and the cancer patients, loving them with the love of the Crucified One whom she loved. Then the Lord gave her sisters-women who recognized that Catherine was a servant of the Servant, Jesus Christ. They began to walk the way with her.

When the plague broke out in Sienna, one of her friends wrote: "She was always with the plague-stricken. She prepared them for death; she buried them with her own hands. I myself witnessed the joy with which she nursed them and how effective her words were."

Catherine also regularly frequented the prisons and loved to work with those preparing for execution. One of the many stories told concerns one prisoner, whom she led to faith and baptism. Having heard he was afraid to die, she wanted him to experience the love of Jesus so much that she stayed with him, holding his head even as he was executed, so that he would die encountering the love of God, manifested in a follower of His Son, Jesus Christ!

Catherine's reputation for holiness spread throughout Italy. Her wisdom and ability to bring true reconciliation and authentic peace to hostile parties led to her being sought out by families and political leaders who were at odds with one another. That same gift was offered, as were all of her gifts, to the Church. Rome, the center of Western Christianity, had fallen into decay. The pope was in Avignon in the South of France.

In 1377, Gregory did return. When he died the next year, Urban VI was elected in Rome and a rival, Clement VII, installed in Avignon. A time of great upheaval, division, and suffering-known as the Great Schism-ensued in the Church. Catherine's heart broke over the divisions in the body of Christ. She persevered in prayer and continued her counsel to all who would listen: the pope, cardinals, kings, princes and bishops.

In January of 1380, while praying at Peter's tomb, she experienced the great weight of the Church fall on her shoulders, and she offered herself and her suffering as a "victim" for the renewal of the Church. On April 29 of that year, around midday, God called her to Himself.

Days before her death, she wrote, "If I die, let it be known that I die ... of passion for the Church." Her deathbed prayer is a model of love poured out for all who follow Jesus Christ and desire thehealing and unity of the Church in our day:

"Oh eternal God, receive the sacrifice of my own life on behalf of the mystical Body of Holy Church. I have nothing else to give except what You have given me."

She wrote only one book, Dialogue, which is an ongoing account of her intimate conversational relationship with the Lord whom she loved so intimately. She considered herself espoused to Him. At the age of thirty-three, the same age at which Jesus offered Himself on the altar of the Cross, Catherine was called home to the Father.

Catherine of Sienna calls each one of us to love God right where we are - and to invite Him to transform us through the stuff of our daily lives so that we can reflect the Image of His Son Jesus Christ to a world waiting to be born. The saints we commemorate during the Church year put legs on the Gospel. They call us to do the same. Like them, we are all called to the Way of Life they pursued, the Way of following Jesus Christ who is the Way, the Truth and the Life.

In an age characterized by a growing hostility toward the Church, we are being called to become "victims" who are willing suffer for that Church and pour ourselves out for her genuine renewal. After all, the Church is the Body of Christ, continuing His redemptive mission until He returns. We are all members of that Body of Christ, called to participate, no matter what our state in life, in that mission.