We need fewer words and more action from godly men in this hour of need.

In an age given over to the selfish pursuit of illusory pleasure, Joseph should  be lifted up as a model to men. He was a man of few words, he spoke through his actions, and he did as the angel of the Lord had commanded him.We need fewer words and more action from godly men in this hour of need. 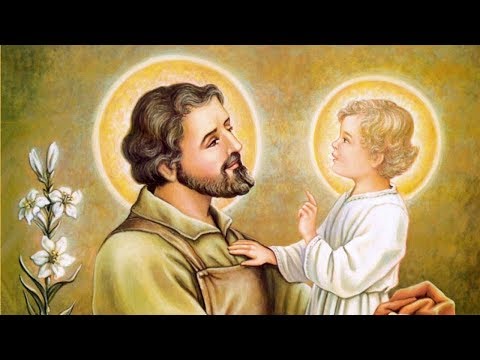 P>CHESAPEAKE, Va. (Catholic Online) - On this Feast of Joseph, the Husband of Mary, there is a beautiful excerpt from a sermon by St Bernadine in our Office of Readings. "There is a general rule concerning all special graces granted to any human being. Whenever the divine favour chooses someone to receive a special grace, or to accept a lofty vocation, God adorns the person chosen with all the gifts of the Spirit needed to fulfil the task at hand."

In the biblical accounts we have of this wonderful saint we read of his encounter with an angel. This "annunciation" reveals the secret to every man of how we are to resond to the Lord's call in each of our lives. "Jacob was the father of Joseph, the husband of Mary; of whom Jesus was born, he who is called Christ. Now the birth of Jesus Christ took place in this way. When his mother Mary had been betrothed to Joseph, before they came together she was found to be with child of the Holy Spirit; and her husband Joseph, being a just man and unwilling to put her to shame, resolved to send her away quietly.

"But as he considered this, behold, an angel of the Lord appeared to him in a dream, saying, "Joseph, son of David, do not fear to take Mary your wife, for that which is conceived in her is of the Holy Spirit; she will bear a son, and you shall call his name Jesus, for he will save his people from their sins". When Joseph woke from sleep, he did as the angel of the Lord commanded him."(Matthew 1:16 - 24)

From antiquity, Christians have cherished Joseph as a model of genuine manly virtue. Since the fourteenth century there has been a specific day set aside in the Roman calendar to honor him. He is viewed as the "Patron" of the universal Church, of all husbands and of social justice. He has also been designated as the patron of all workers.

He was a simple Carpenter who taught the Word Incarnate, the Child Jesus, how to work with wood. This Joseph was the foster father of the Incarnate Word of God, the One of whom observers would later ask "Is not this the Carpenter´s son?" (Mt. 13:55) Joseph loved Jesus with a unique and exemplary love and played a unique and extraordinary role in the plan of salvation. This Jesus of Nazareth learned to work with wood from the hands of Joseph. During his 33rd year of life he saved the world working with wood, the wood of the Cross which became the altar of His Sacrifice.

In an age that has lost its way, given over to the selfish pursuit of illusory pleasure, Joseph should again be lifted up as a model, particularly to men who desire to follow Jesus Christ. In popular language we sometimes use an expression to refer to men who are comfortable "in their skin" and content with being men. We say of such a man "He is a man´s man". Well, Joseph is a true "man´s man." He was a man of few words, he spoke through his actions, and he did as the angel of the Lord had commanded.We need fewer words and more action from godly men in this hour of need.

Joseph was a man for others. Though the Scriptures say little about Joseph, even that absence speaks volumes. Why? Because to Joseph, he was not the one who was important, others were. He loved Mary above himself and his behavior was called "just" in the Scriptures as a result of his love. He was prepared to "do the right thing" when she was found to be with child. He could have chosen otherwise. How refreshing this upright manly behavior is in an age where men too often cower in the face of difficulty and compromise out of cowardice.

Joseph was a man of faith and courage. Along with loving his betrothed, he loved His God courageously. He had a close, intimate personal relationship with the God of His Fathers. In fact, this "just" man was, in a sense, the last Patriarch, completing the lineage. Through his response of faith, He would receive the great gift promised for all men and women and hold in His arms the One that His fathers had only longed to see.

God´s messenger, an angel, visited Joseph in a dream. He was ready to receive. He was disposed not only to the encounter but to the invitation it presented to pour himself out in love and for Love. He heard the message and, without hesitation, did what the Lord commanded! This is, in a real sense, Joseph´s "Fiat", his Yes, his exercise of human freedom to advance God´s eternal plan. How refreshing such manly faith and courage are in an age of cowardice and rebellion.

Joseph was a humble man. There was not an ounce of false bravado or "machismo" in this servant of God. Named after the great Patriarch who was sold into slavery in Egypt; he bore the name with similar humility. As the Old Testament Joseph embraced his lot, rejecting the temptation to bitterness or "victim-hood" and actually came to rule Egypt, forgiving the very brothers who had sold him into slavery; so too this son of the Covenant embraced the One who would establish the New Covenant on the altar of Calvary. In so doing, Joseph is a patron and a model to all men who choose to walk the way of the cross in the footsteps of Jesus. Joseph poured Himself out -of himself - and became filled with the love and life of God.

He gave himself fully to God through accepting his unique and specific vocation as a guardian of the Redeemer. The child Jesus, God in the flesh, was given to Joseph. A Carpenter, Joseph taught this child how to work with wood and as a Jewish father he taught him the Law. During these so-called "hidden years", Jesus was with Joseph and Joseph was with Jesus. Joseph uniquely participated in the mystery of Gods plan of redemption through simply being the man he was called to be. From the moment he said yes to the angel, he lived that "yes" for the Lord. How challenging an example he is in an age of narcissism and inordinate self-love.

Over two millennia, the mission of Jesus has continued through His Body on earth, His Church. He has entrusted the work of that mission to all men and women who accept the invitation to empty themselves - of themselves - in order to be filled with the very life and love of God and then be used in His redemptive mission for the world. Through the Fount of living water called Baptism, he invites each one of us into His new family, the Body of His Son, the Church. He still gives His message to men who, like Joseph, cultivate ears to hear and then choose to exercise authentic manly virtue and act out of courage.

The Lord still invites men to turn the ordinary into extraordinary through cooperation with God and participation in His Divine plan. The Lord is truly looking for a "few good men" like Joseph who will work in the workshop of the world that he created in order to recreate it anew in His Son.

In this age of the "anti-hero", men should rediscover this true hero, this "man´s man" named Joseph. Then, we should learn his way of obedience, following his example by courageously, humbly and faithfully loving Jesus Christ. We need to learn to give our "Yes" to the God whose Love always invites our participation. Joseph is our teacher on this way, a true 'Man´s Man', calling all men to follow Jesus.