Bishop Nicholas DiMarzio has completed his Apostolic Visitation of the Diocese of Buffalo. 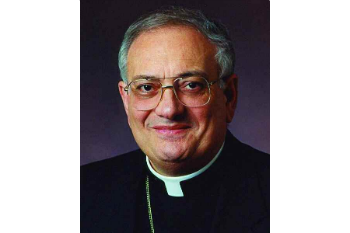 Buffalo, N.Y., (CNA) - Bishop Nicholas DiMarzio has completed his Apostolic Visitation of the Diocese of Buffalo.

A statement released by DiMarzio's own Diocese of Brooklyn on Thursday confirmed that the visitation had concluded and he will submit a report to the Holy See.

The bishop offered no comment on his findings in the scandal-hit Buffalo diocese.

The visitation, a canonical inspection and fact-finding mission, was ordered by Cardinal Marc Ouellet of the Congregation of Bishops in Rome, the Vatican department responsible for overseeing the personal and administrative conduct of bishops.

The visitation was announced Oct. 3, after nearly a year of controversy in the northern New York state diocese. The Diocese of Brooklyn confirmed that DiMarzio had made a total of three trips, spending a week in Buffalo as he conducted nearly a series of in-person interviews.

"He met with and interviewed close to 80 individuals; both clergy and laypeople," the statement from the Brooklyn diocese said, "including members of the Presbyteral Council, Diocesan Consultors, Diocesan Finance Council, Diocesan Pastoral Council, Territorial Vicars, and Senior Priests. He also spoke with representatives of outside groups such as the Movement to Restore Trust, college presidents, and other interested parties."

"Now that Bishop DiMarzio has finished his interviews, he will compile the information and prepare a report which will be submitted to the Holy See," the statement concluded.

In its announcement earlier this month, the apostolic nunciature to the United States said that the process in Buffalo is "non-judicial and non-administrative," meaning that no formal charges are being considered against the scandal-plagued Bishop Richard Malone, leader of the Buffalo diocese.

DiMarzio has previously said that he would approach the situation in Buffalo with "an open mind."

"This is a difficult period in the life of the Church in Buffalo," DiMarzio said when he accepted the assignment earlier this month.

"I will keep an open mind throughout the process and do my best to learn the facts and gain a thorough understanding of the situation in order to fulfill the mandate of this Apostolic Visitation."

Although he has faced media criticism for more than a year, Malone said earlier this month that he was "committed to cooperate fully" with the investigation, and that he welcomed the visitation which, he said would "improve the local Church's ability to minister to the people it serves."

In August, a RICO lawsuit was filed against the diocese and the bishop, alleging that the response of the diocese was comparable to an organized crime syndicate.

In the conversations, Malone seems to acknowledge the legitimacy of accusations of harassment and a violation of the seal of confession made against a diocesan priest, Fr. Jeffrey Nowak, by a seminarian, months before the diocese removed Nowak from active ministry.

Malone, 73, has led the Buffalo diocese since 2012. He was ordained a priest of Boston in 1972, and became an auxiliary bishop in that diocese in 2000, two years before a national sexual abuse scandal emerged in the United States, centered on the Archdiocese of Boston and the leadership of Cardinal Bernard Law. Malone was Maine's bishop from 2004 until 2012.