The Environmental Protection Agency (EPA) is asking houses of worship to eliminate mercury products, while at the same time saying that restrictions on mercury emissions at power plants are no longer necessary. 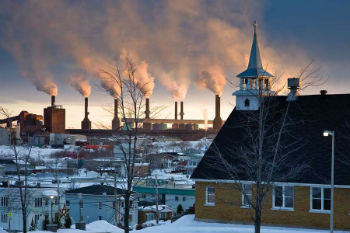 Washington D.C., (CNA) - The Environmental Protection Agency (EPA) is asking houses of worship to eliminate mercury products, while at the same time saying that restrictions on mercury emissions at power plants are no longer necessary.

In a booklet of environmental recommendations that was published on Oct. 2, the EPA encouraged houses of worship to assess their aging facilities for environmental sustainability and for any public health hazards.

"Churches and houses of worship play a vital role in American society, and we are providing them with voluntary recommendations for effective and affordable measures to protect the health of their congregations and staff," EPA Administrator Andrew Wheeler stated upon release of the booklet during Children's Health Month.

Some of the possible health risks in older religious facilities might include mold, lead paint or plumbing, and equipment that contains mercury, such as thermometers or compact fluorescent lamps (CFLs) light bulbs.

One of the EPA's recommendations is for churches to "eliminate mercury" by switching from older products to mercury-free equipment.

Houses of worship should also conduct an "inventory" of any "chemicals, materials and equipment containing mercury" on their property, the EPA said, and make sure that a "mercury spill kit and spill response plan" exists on the premises.

The booklet was the result of conversations of faith leaders from around the country with agency officials; the leaders were looking for more opportunities for environmental stewardship, and the EPA provided the booklet as a means for them to examine what could be done to improve their own facilities.

"It's a very good sign. It's a positive development," Ricardo Simmonds, the environmental justice consultant for the U.S. Conference of Catholic Bishops (USCCB) Human Development office, told CNA of the booklet.

"What I think stands out the most is integrating the faith and the environment," he said of the booklet's focus on houses of worship which, he added, is a message of Pope Francis' 2015 ecology encyclical Laudato Si.

At the same time as the EPA is requesting that houses of worship eliminate mercury, the agency has also proposed a rule that no longer recognizes regulations on mercury emissions as necessary.

In 2018, the agency proposed a rule stating that, due to the disparity between the cost to power plants of Obama-era regulations on pollution and the estimated benefits of those regulations to public health, the restrictions were not "necessary" even though they would still be in place.

In 2011, the Obama administration had proposed the Mercury and Air Toxics Standards (MATS), which were eventually adopted. The MATS regulated the amount of mercury and other hazardous air pollutants (HAPs) that coal- and oil-fired power plants could emit, in the name of public health.

The USCCB supported those regulations when they were proposed in 2011, saying that the pollutants contributed to public health problems such as asthma, cancer, heart disease, learning disabilities, and brain damage. Mercury emissions can contaminate local water supplies and affect the development of young children, the conference said.

In 2015, the Supreme Court ruled in Michigan v. EPA that the government had to consider costs to power companies when regulating electric utility steam generating units (EGUs), the units containing mercury emissions.

In light of the court's decision, the Trump administration revised cost estimates for regulating EPUs at $7.4 to $9.6 billion annually for coal- and oil-fired power plants. Meanwhile, the EPA estimated the benefits of regulating hazardous air pollutants at the power plants at only $4 to $6 million annually-a fraction of the estimated cost to power companies.

As a result, while keeping the MATS in place, the administration said it "proposes to determine that it is not 'appropriate and necessary' to regulate HAP emissions from power plants under Section 112 of the Clean Air Act."

Simmons explained to CNA that, with both the heads of the pro-life and domestic justice committees weighing in, it was a reflection of Laudato Si that "human health" and the "environment" are connected.

As the rule was being considered, the USCCB submitted public comments noting that while it did not revoke the MATS standards, it "greatly weakens the legal justification" for them.

"Catholic social doctrine affirms that 'environmental protection cannot be assured solely on the basis of financial calculations of costs and benefits,'" the USCCB said of the move.

Simmons told CNA on Friday that EPA proposed rule "is complex," and while "it doesn't revoke the rule itself," it instead "removes a legal justification for the standards."

The Conference had argued that the standards were indeed necessary for public health, he said.

"We welcome the EPA advocating for safeguarding mercury in a different form," Simmons said of the houses of worship booklet.