The Holy See has announced that Bishop Nicholas DiMarzio of Brooklyn will lead an Apostolic Visitation of the Diocese of Buffalo. 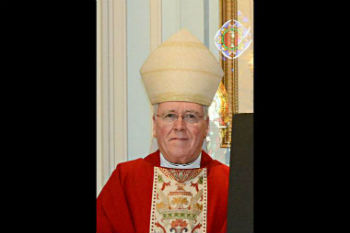 Washington D.C., (CNA) - The Holy See has announced that Bishop Nicholas DiMarzio of Brooklyn will lead an Apostolic Visitation of the Diocese of Buffalo.

The visitation, a canonical inspection and fact-finding mission, was ordered by Cardinal Marc Ouellet of the Congregation of Bishops in Rome, the Vatican department responsible for overseeing the personal conduct of bishops.

A notice issued by the Apostolic Nunciature in Washington, DC, on Thursday confirmed that the visitation was "non-judicial and non-administrative," meaning that no formal charges are currently being considered against the scandal-plagued Bishop Richard Malone of Buffalo.

The nunciature also said that the visitation had not been ordered under the provisions of Vos estis lux mundi, the policy document on sexual abuse and diocesan administration issued May 7 by Pope Francis, which came into effect June 1.

DiMarzio will will assisted by Fr. Steven Aguggia, the judicial vicar of the Brooklyn diocese, who will act as secretary of the visitation. The nunciature did not confirm when the visitation would formally begin, or how long it would continue before transmitting its findings to the Congregation for Bishops in Rome.

"This is a difficult period in the life of the Church in Buffalo," DiMarzio said in a statement released on Oct. 3.

"I pledge I will keep an open mind throughout the process and do my best to learn the facts and gain a thorough understanding of the situation in order to fulfill the mandate of this Apostolic Visitation."

In a statement released Thursday afternoon, the Diocese of Buffalo said that Malone "welcomes" the apostolic visitation.

"Bishop Malone has committed to cooperate fully and stated that this Visitation is for the good of the Church in Buffalo. The purpose of an apostolic visitation is to assist the diocese and improve the local Church's ability to minister to the people it serves," the diocese said.

"The mission of the Church in Buffalo continues to be to seek justice and compassion for the victim-survivors of sexual abuse and their families and to continue the good works of the church, fulfilled on a daily basis, by faithful men and women who serve a wide spectrum of our diocese."

The diocese added its "heartfelt gratitude" to DiMarzio, and "to the Catholic community of Buffalo, including the lay faithful and the clergy."

The visitation is the second in the U.S. authorized in recent months. Bishop Michael Hoeppner of Crookston, Minnesota was investigated in September by Archbishop Bernard Hebda of St. Paul-Minneapolis. Sources close to the archbishop tell CNA that Hebda sent to Rome in late September his findings and reccomendation in the case, and is now awaiting further instructions.
In a year of scandals related to clerical sexual abuse, Malone has repeatedly found himself at the center of media attention.

In November 2018, a former employee leaked confidential diocesan documents related to the handling of claims of clerical sexual abuse.

In August, a RICO lawsuit was filed against the diocese and the bishop, alleging that the response of the diocese was comparable to an organized crime syndicate.

In the conversations, Malone seems to acknowledge the legitimacy of accusations of harassment and a violation of the seal of confession made against a diocesan priest, Fr. Jeffrey Nowak, by a seminarian, months before the diocese removed Nowak from active ministry.

Malone, 73, has led the Buffalo diocese since 2012. He was ordained a priest of Boston in 1972, and became an auxiliary bishop in that diocese in 2000, two years before a national sexual abuse scandal emerged in the United States, centered on the Archdiocese of Boston and the leadership of Cardinal Bernard Law. Malone was Maine's bishop from 2004 until 2012.

"Our Holy Father has a great devotion to Our Lady Untier of Knots," DiMarzio said, "I beg the intercession of the Blessed Mother, that I may be an instrument for surfacing the truth so that justice might be served and God's mercy experienced."