With the end-of-the-month deadline for Congress to pass legislation to fund the federal government fast approaching, lawmakers remain at odds over a series of issues, including key pro-life policies, making the need for a short-term extension agreement likely. 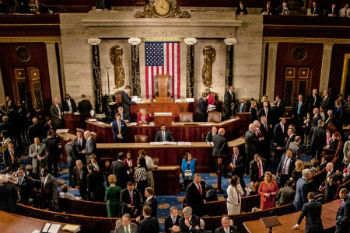 Washington D.C., (CNA) - With the end-of-the-month deadline for Congress to pass legislation to fund the federal government fast approaching, lawmakers remain at odds over a series of issues, including key pro-life policies, making the need for a short-term extension agreement likely.

Such a funding extension a Continuing Resolution (CR) would be "the best thing for pro-lifers right now," Tom McClusky, president of March for Life Action, told CNA last week.

The two amendments would have rolled back pro-life administration policies, the Title X "Protect Life Rule" and the expanded Mexico City Policy. Both are protections against taxpayer funding of abortions at home and abroad.

One of the policies, the "Protect Life Rule" which went into effect in August, clarified that any recipients of Title X family planning funding could not refer for women for abortions or collocate in the same facility with abortion clinics.

The administration's expanded version of the Mexico City Policy applies restrictions to federal funding of abortions abroad to over $8.8 billion of U.S. foreign assistance, barring funding of foreign non-governmental organizations that perform or promote abortions.

Two Republicans on the Senate Appropriations Committee Sens. Susan Collins (R-Maine) and Lisa Murkowski (R-Alaska) were expected to vote for the amendments. In response, the legislation was pulled from consideration before it could reach a scheduled markup hearing last Thursday.

Senators from both parties are also at odds over other issues in the appropriations process, including border wall funding.

On Tuesday, Senate Majority Leader Mitch McConnell (R-Ky.) cited the budget agreement struck between President Trump and Congressional leaders in July, and said Democrats were walking back their agreement not to insert "poison pill" amendments into appropriations bills.

McConnell added that he was moving to advance a package of House-passed appropriations bills in the Senate before resorting to a CR.

"They include several of the domestic funding bills along with the legislation to fund the Department of Defense. There should be no reason for Democrats to vote against this first procedural step," he said.

Senate Minority Leader Chuck Schumer (D-N.Y.) on Tuesday criticized Senate Republicans for "acting in a totally partisan way" by seeking to allocate an additional $12 billion in funding of the U.S. Mexico border wall, in part by taking funding from medical research, opioid treatment and funding for military families.

"This is a stunt if I've ever seen one. Putting this bill $12 billion more for the wall, no buy-in from Democrats for a vote. It will lose. We know it will lose," Schumer said on the Senate Floor on Tuesday.

As the Senate considers the 12 appropriations bills which must be passed before the end of the 2019 fiscal year, the House is now working on a CR in case the bills do not suceed, the text of which was yet to be released by Tuesday afternoon. House leaders indicated that a vote on a CR was likely before the end of the week.

While debate among legislators continued, a Continuing Resolution would at keep funding at the "status quo" level without the threat of new pro-abortion amendments in the meantime, McClusky told CNA last week.

A scenario that would be concerning, he added, would be the passage of a CR combined with an omnibus bill which would provide new funding for certain government agencies for the 2020 fiscal year in the "omnibus" section while providing a short-term funding extensions for other government agencies in the CR section.

McClusky said that, because such a bill would be a much larger and more comprehensive piece of legislation than a simple CR, it would be harder for members to keep track of amendments as they were added including controversial amendments to repeals of pro-life policies.

McClusky told CNA that the Congressional appropriations proves was in clear need of reform. "This is their day job," he said.