Senate Democrats acted Tuesday to block funding of the Federal Title X family planning program, drawing condemnation from Republicans and pro-life leaders as a violation of a previous budget agreement between President Trump and congressional leaders. 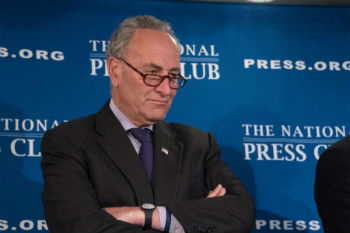 Senate Democrats inserted an amendment to block funding of the Title X program for the 2020 fiscal year into an appropriations bill Sept. 10; the bill would fund the Departments of Health and Human Services (HHS), Education, Labor, and other agencies.

In July, Trump and congressional leaders agreed that no "poison pill" riders would be inserted into spending bills for the next two years, including any amendments trying to undo the administration's existing pro-life policies.

Republicans on the Senate Appropriations Committee responded to Tuesday's action by canceling a scheduled vote on the bill, prompting questions about the likely passage of the appropriations legislation just weeks before the end of the fiscal year.

Senate Majority Leader Mitch McConnell (R-Ky.) on Tuesday called the effort to block Title X funding a "disturbing development" and a violation of the budget agreement.

McConnell said that the budget agreement between President Trump, himself, Speaker Pelosi, Senate Minority Leader Chuck Schumer and House Minority Leader Kevin McCarthy made clear "what a poison pill was. A poison pill was anything that was not in existing law. Anything that was not in existing law. If there was to be any change all five of us would have to sign off on it."

Sen. Chuck Schumer (D-N.Y.) blamed Republican attempts to insert $12 billion in funding for a wall along the U.S. Mexico border as the reason for the breakdown in budget negotiations.

A markup hearing scheduled on Thursday for the Labor-HHS appropriations bill - required to move it towards the Senate Floor for a vote - has now been postponed, CNA was told by congressional staff, until both sides can agree on how the budget agreement will be applied to the appropriations process.

The effort to block Title X funding comes one month after new administration regulations went into effect for the Title X family planning program. The new rules clarify that abortion cannot be funded under the program as a method of family planning and that recipients cannot make abortion referrals or "collocate" with abortion clinics.

Other requirements include more reporting on subrecipients and referral agencies; mandatory protocols for clinics to protect survivors of sexual assault, as well as mandatory reporting requirements for such cases. The rules also encourage communication between minors and their parents on family planning matters.

Planned Parenthood announced Aug. 19 that it would leave the Title X program, foregoing as much as $60 million per year in Title X grants, rather than comply with the new rule. A statement issued by a senior official at the abortion provider on Tuesday thanked Democrats for fighting to "protect" Title X.

Planned Parenthood vice president of government relations and public policy, Jacqueline Ayers, called the Republicans' cancellation of the vote on the Labor-HHS appropriations bill "shocking and disgusting" in a statement.

"We thank Senator Murray for making it clear that Democrats and Republicans should stand together and insist that Title X be protected in any spending bill moving through Congress," Ayers stated, thanking Sen. Patty Murray (D-Wash.), a member of the Senate Appropriations Committee.

In a released a statement on Tuesday, the president of the Susan B. Anthony List, a leading pro-life advocacy group, called the attempt to block Title X funding "unacceptable" and in opposition to the budget agreement.

"By excluding new riders and poison pills, the agreement safeguarded President Trump's Protect Life Rule so that Title X tax dollars will no longer be funneled to abortion businesses like Planned Parenthood. It is unacceptable for Senate Democrats to renege on their end of the deal," Dannenfelser stated.

"Now, on day one of subcommittee markups, Senate Democrats are threatening to derail the entire process with an amendment to force taxpayers to fund the abortion industry against their clearly expressed will."