Nancy Pelosi, Boasting of her Devout Catholic faith, is a Heretic

It is time to take the verbal gloves off once again - especially, as the 2016 election campaign begins in the United States of America. It must be said that Nancy Pelosi is engaging in more than scandal. She is engaging in the "obstinate denial of truths which must be believed by every Catholic Christian". In other words, she is engaging in heresy. 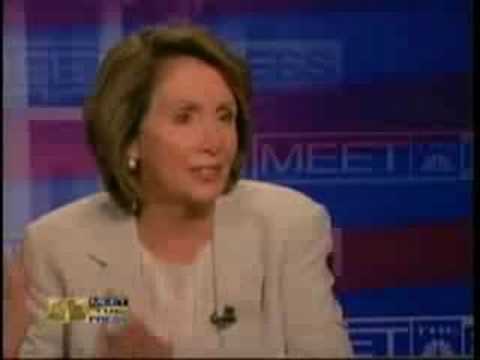 CHESAPEAKE, VA (Catholic Online) - Congresswoman Nancy Pelosi was interviewed last year by Thomas Roberts of MSNBC. Mr. Roberts openly engages in homosexual acts and wedded his homosexual paramour in 2012. Pelosi boasted of having brought her grandchildren to watch when she received an award from the Gay and Lesbian Victory Fund. She told Roberts she wanted the children to know that marriage between two men or two women was consistent with Catholic teaching.

Of course, she is absolutely and unquestionably wrong about that claim.

Furthermore, both the interview as well as the claim, constitute a knowing participation in promoting heresy. The Congregation for the Doctrine of the Catholic Faith of the Vatican released a clear summary of the teaching of the Catholic Church concerning marriage in 2003. Here is an excerpt,

"The Church's teaching on marriage and on the complementarity of the sexes reiterates a truth that is evident to right reason and recognized as such by all the major cultures of the world. Marriage is not just any relationship between human beings. It was established by the Creator with its own nature, essential properties and purpose."

That same congregation, which is officially tasked with defending the Catholic faith against error, continued, "No ideology can erase from the human spirit the certainty that marriage exists solely between a man and a woman, who by mutual personal gift, proper and exclusive to themselves, tend toward the communion of their persons. In this way, they mutually perfect each other, in order to cooperate with God in the procreation and upbringing of new human lives."

The Congregation issued a document the year before specifically directed to Catholic politicians. Of course, Ms. Pelosi is a politician, and she claims to be a "devout Catholic". They instructed them, "the family needs to be safeguarded and promoted, based on monogamous marriage between a man and a woman, and protected in its unity and stability in the face of modern laws on divorce: in no way can other forms of cohabitation be placed on the same level as marriage, nor can they receive legal recognition as such."

Nancy Pelosi knows full well that this is the official teaching of her Church. She is openly and publicly rejecting it.

She has been regularly and publicly corrected by her Bishop on such matters in the past. Further, she is intentionally and publicly leading others into error. The Catechism of the Catholic Church she professes to embrace calls this kind of action heresy, "Heresy is the obstinate post-baptismal denial of some truth which must be believed with divine and Catholic faith." (Catechism of the Catholic Church, par. #2089).

I know that using words as heresy in an age of political correctness -and in the face of a growing syncretism within segments of what still calls itself Christianity-  may be considered controversial or inappropriate for civil discourse. However, I write as a concerned Catholic Christian who works with other Christians, across confessional lines.

I am regularly asked by Christians of other traditions, churches and communities, how someone like Nancy Pelosi can continue to say such things in public and actually claim it is the teaching of the Catholic Church, without facing any repercussions from the leadership of the Catholic Church.

Frankly, it is increasingly hard for me to give a clear answer.

I know that there is an ongoing division over her reception of holy communion due to her open rejection of church teaching concerning abortion. Within Catholic circles, the applicability of Section 915 of the Code of Canon Law is routinely brought up as it relates to the Congresswoman. Her rejection of the teaching of her church is public and egregious. But, that is a discussion within the Catholic community. I am also concerned about the effect of her behavior within both the broader Christian community. Nancy Pelosi needs to be called what she is, a heretic. A little bit of heresy is like a little bit of deadly poison.

One of my favorite early Church Fathers, Irenaeus, the Bishop of Lyon, France, was born in Asia Minor in the year 125. His seminal work, "Against Heresies", is a refutation of the teachings of the "Christian" Gnostics of his day who espoused a body/soul dualism that viewed the human person as trapped within both the body and the material universe.

He entitled the treatise appropriately. He wanted to expose the false teaching of these heretics so that faithful Christians would not be deceived and fall into error. Remember, in the early Christian centuries, the Church was still undivided and these errant teachings threatened all Christians. They had to be exposed and opposed.

In the past, I have written about Pelosi's fundamental error concerning the dignity of every human life and her open and notorious rejection of the teaching of the Catholic Church on the fundamental Right to Life. I have also engaged her on the proper understanding and formation of conscience.

I accused her of scandal, "For decades, Nancy Pelosi has enacted and vocally defended laws that have led to the destruction of millions of innocent human beings by procured abortion, while claiming to be a "devout Catholic." She even received the top award from Planned Parenthood, named after racist eugenicist Margaret Sanger. This is the very epitome of scandal.

Finally, I made this assertion, "It is one thing for someone to claim to be a Catholic and openly dissent from the Church. When that person is an influential leader and does so in such a public manner, however, she is committing what the Catholic Catechism calls a "grave offense which may lead others into spiritual death."

It is time to take the verbal gloves off once again - especially, as the 2016 election campaign begins in the United States of America. It must be said that Nancy Pelosi is engaging in more than scandal. She is engaging in the "obstinate denial of truths which must be believed by every Catholic Christian". In other words, she is engaging in heresy.

For her own salvation as well as the good reputation of the Catholic Church, and, in the interest of offering clarification to the broader Christian community, it is time to say with clarity and charity, Nancy Pelosi, though publicly boasting of her devout Catholic Faith, is a heretic. I sincerely hope she acknowledges her obstinate denial of truths which must be believed by every Catholic soon. However, until then, the truth needs to be told.

Deacon Keith A. Fournier is an ordained minister, a Catholic Deacon, who works with other Christian leaders across confessional lines. He is the Founder and Chairman of Common Good Foundation and Common Good Alliance. He and his wife Laurine have five grown children and seven grandchildren. He is a human rights lawyer and public policy advocate who served as the first and founding Executive Director of the American Center for Law and Justice in the nineteen nineties and has long been active at the intersection of faith and culture. He is a senior contributing writer to The Stream.