Solidarity Movement For the West: Fr. Popieluszko, Priest and Martyr

The Solidarity Trade Union of Poland helped to bring down the Berlin Wall, a symbol of the evil tyranny of atheistic Marxist ideology. Now, some of the very tenets of that ideology have actually corrupted the trade union movement in the West. In the West, we need a new Labor Movement, a "Solidarity" for the West, which is built upon an authentic vision of the human person, the family and a truly free society. 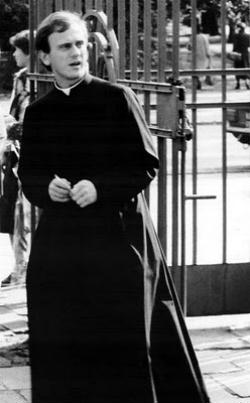 NICOSIA, Cyprus (Catholic Online) - Underscoring the significance of the extraordinary event, Pope Benedict XVI, the pilgrim Pope, while on an apostolic visit to Cyprus, took time during the praying of the Angelus to speak to the the faithful in Poland who are gathering over a quarter of a million strong to pray in Pidulski Square. There, Archbishop Angelo Amato the Prefect of the Congregation for the Causes of Saints beatified the heroic priest  Fr Jerzy Popieluzsko, chaplain to the Solidarity movement. It was his spiritual leadership and pastoral care which kept that wonderful example of an authentic response to Catholic Social Doctrine, focused on the only true humanism, the Catholic Christian faith. This heroic man was tortured, bound, beaten and thrown into a reservoir. Fr. Jerzy presided at open air liturgies which informed the peaceful protest of the tyranny of atheistic Marxism which afflicted the people of Poland. Next to Lech Walesa, he was the most public face of this freedom movement. Sadly, it seems the very ideology which both of these brave men exposed and opposed is rearing its ugly head again, here in the West, right within our own Trade Union movement! Some Union leaders are actually proposing collectivist ideology, promoting profane and evil notions such as abortion on demand as a proper object of the freedom of "choice" and opposing the Catholic Church, the true advocate of authentic human freedom. Fr. Jerzy is a martyr. He was tortured, beaten, bound and thrown into a reservoir at the age of 37 by thugs. Following his beatification, his relics will be carried in procession to a new Basilica. So beloved by the faithful is this holy priest of the Solidarity movement that 17 million visitors have already visited his tomb to pray.

The recent film, "Nine Days That Changed the World"  documents the historic work of the trade union movement called "Solidarity" in Poland, among other truly extraordinary historic events. It is one the greatest films I have ever seen. I will be writing concerning this work in the future. It is an historic work which must be seen by ANYBODY concerned about the future of the West. I cannot recommend it highly enough! Solidarity was an example of how a true mediating institution (a staple of Catholic Social Doctrine)  such as a properly functioning Labor Union, can effect real change. This is so important in a culture which has lost its soul. For people in the United States, we have too often seen Labor Unions co-opted by those with left leaning political agendas. There is an extraordinary irony here. Unions were the great adversary of leftist and rightist ideologies for many years. Now, they seem to be in the pocket of the new left in the West! That MUST change!

The Solidarity Trade Union of Poland helped to bring down the Berlin Wall, a symbol of the evil tyranny of atheistic Marxist ideology. Now, some of the very tenets of that ideology have actually corrupted the trade union movement in the West. In the West, we need a new Labor Movement, a "Solidarity" for the West, which is built upon an authentic vision of the human person, the family, a truly free society.

We need a new Union movement built upon an AUTHENTIC  vision of Social Justice (not the neo-Marxist counterfeit) and the true understanding of that expression which has been stolen by too may agenda oriented opportunists, the "common good". In Poland, under the leadership of the hero Lech Walesa, we had an example of the true integration of authentic Catholic Social teaching concerning the dignity of the human person and authentic freedom as a basis for true social justice.

"Social Justice" as an expression has come under serious attack as the United States has suffered the ill effects of unions such as SEIU.Popular talk radio personalities denigrate the phrase. I understand. It has been stolen by the new Cultural and Social Revolutionaries. One has only to look to the example of Poland to see this error exposed and find a real example of how labor unions, founded upon objective truth, can be an agent for true freedom against a tyranical government.  The beatification of Father Jerzy Popieluzsko presents Catholic Christians throughout the world with an opportunity to RECLAIM the very phrase "Social Justice" so as to ground it once again in Jesus Christ who is the way to authentic liberation.  His beloved mother will carry the relics of her slain and saintly son in a liturgical procession. This beatification is one of several prophetic signs which begin the closing week of the year for Priests where over 10,000 priests converge on Rome. Pray for our Priests! We need them. Here are the Holy Father's words of tribute: *****  Dear Brothers and Sisters in Christ,
At the midday hour it is the Church's tradition to turn in prayer to the Blessed Virgin Mary, joyfully recalling her ready acceptance of the Lord's invitation to become the mother of God. It was an invitation that filled her with trepidation, one which she could scarcely even comprehend. It was a sign that God had chosen her, his lowly handmaid, to cooperate with him in his saving work. How we rejoice at the generosity of her response! Through her "yes", the hope of the ages became a reality, the One whom Israel had long awaited came into the world, into our history. Of him the angel promised that his kingdom would have no end (cf. Lk 1:33). Some thirty years later, as Mary stood weeping at the foot of the cross, it must have been hard to keep that hope alive. The forces of darkness seemed to have gained the upper hand. And yet, deep down, she would have remembered the angel's words. Even amid the desolation of Holy Saturday the certitude of hope carried her forward into the joy of Easter morning. And so we, her children, live in the same confident hope that the Word made flesh in Mary's womb will never abandon us. He, the Son of God and Son of Mary, strengthens the communion that binds us together, so that we can bear witness to him and to the power of his healing and reconciling love. I would now like to say a few words in Polish on the happy occasion of the beatification today of Jerzy Popieluszko, priest and martyr: I send cordial greetings to the Church in Poland which today rejoices at the elevation to the altars of Father Jerzy Popieluszko. His zealous service and his martyrdom are a special sign of the victory of good over evil. May his example and his intercession nourish the zeal of priests and enkindle the faithful with love. Let us now implore Mary our Mother to intercede for all of us, for the people of Cyprus, and for the Church throughout the Middle East with Christ, her Son, the Prince of Peace. Benedict XVI
Angelus - Cyprus
June 6, 2010