'There's a way': Several Catholics step up to help their neighbors during unprecedented Texas winter storm

Amid a winter storm that brought freezing temperatures and widespread power outages to much of Texas, Catholics are stepping up to help their neighbors even while dealing with their own shortages of electricity and water. 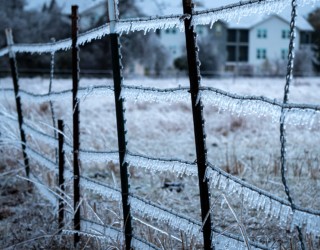 Photo by Hunter Gascon on Unsplash

Denver Newsroom (CNA) - Unseasonably cold temperatures in most of Texas-- including record lows in cities like San Antonio and Corpus Christi-- along with snow and ice have this week crippled much of the state and have caused widespread water problems and power outages.

Nearly 3.5 million people in Texas were without electricity as of Wednesday morning, with many outages expected to continue into at least Thursday.

Catholic churches in several Texas dioceses, including San Antonio and Fort Worth, have opened their doors to serve as warming shelters.

In the archdiocese of San Antonio, which covers part of south-central Texas, at least six churches are open to provide emergency shelter despite some continuing to suffer from their own electrical and water problems.

Spokesman Jordan McMurrough told CNA that these churches are currently open to provide shelter during the day as of Wednesday: St. Pius X Church at 3303 Urban Crest, St. Patrick's Church at 1114 Willow St, and Blessed Sacrament Church at 600 Oblate in San Antonio; and Our Lady of Guadalupe Church at 13715 Riggs Road in Helotes, Texas.

San Antonio Archbishop Gustavo Garcia-Siller has dispensed Catholics in his diocese from their obligation of Ash Wednesday fasting and abstinence due to the difficult conditions created by the storm.

In Fort Worth, Bishop Michael Olson announced that All Saints Catholic Church on the north side of the city is serving as a warming center.

Catholic Charities of the Archdiocese of Galveston-Houston acquired kits with a blanket, mittens, socks and food for the homeless before the winter weather hit, Betsy Ballard, Communications Director for CCGH, told CNA.

"Sadly, this week we are currently unable to open our food pantries because even our main food supplier, the Houston Food Bank, had to shut down due to icy road conditions," she told CNA.

"We hope to resume food distribution by Thursday, and anticipate even longer lines of people in need when we're able to re-open. We will have to continue serving via drive-through food distribution in order to maintain safety during the pandemic, but we know that volunteers will bundle up and brave colder-than-normal temperatures in order to help people in need," she said.

"Our power problems are so consuming that I don't know if we have the capacity to interact with other Catholic Charities agencies," she added.

In the Diocese of Brownsville, which sits directly across the border from Matamoros, Mexico, the local Catholic Charities agency has been aiding migrants and those camped across the border in Mexico for years, but the frigid temperatures have created new challenges.

Sister Norma Pimentel, MJ, executive director of Catholic Charities Rio Grande Valley, has for the past several years been a visible and highly active advocate for migrants in need of humanitarian aid at the US-Mexico border. She said several hundred asylum seekers arrived at the border the weekend that temperatures dropped.

"This child is crying because his feet are hurting from the severe cold," she said, referencing a video attached to the tweet. "Pray the families don't have to endure such calamities much longer."

Sister Pimentel encouraged anyone wishing to help to look at CCRGV's Amazon Wishlist, which contains items like hot water bottles and heaters.

A spokesman for the diocese of Austin told CNA that they have one parish, St. Mary's in Lampasas, Texas, open and serving warm food.

Many of the city's parishes are without power themselves and at least five have burst pipes causing significant damage, Scott Whitaker of the Austin diocese told CNA.

Warren Phipps, executive director for Catholic Charities of Corpus Christi (CCCC), told CNA that they are working with the city to staff a massive overnight shelter for the city's homeless, housed in a FEMA shelter at a local community college.

CCCC does not normally run an overnight shelter, but was able to open one thanks to the city's help, he said, with a primary focus on the homeless and those who have lost heat.

"I'm so glad that the city has joined us in our efforts to have empathy and compassion for those without shelter, and to truly understand how dangerous the conditions are down here...we're taking everybody."

Other Catholic groups in the area are helping too. The Knights of Columbus in the small community of Alice, Texas have stepped up to help particularly, he said.

"The infrastructure's just not built to handle these cold temperatures," he said, noting that a leak in the city's water supply is also causing problems.

The pandemic makes the response more difficult, he said, but "at this point, the temperatures are deadly, and you can't just say there's nothing you can do - there's a way."