A new mobile app aiming to foster community among Catholic young adults will launch in the next month, coming first to the Washington, D.C., area. 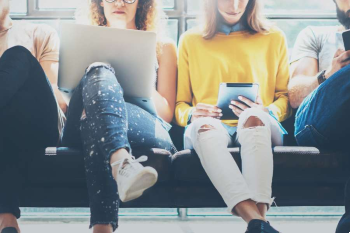 Washington D.C., (CNA) - A new mobile app aiming to foster community among Catholic young adults will launch in the next month, coming first to the Washington, D.C., area.

The app, called Koin, is named after the Greek word Koinonia, which means "Christian communion," co-creator Eric Niehaus told CNA. Once it is live, users will be able to join and create "interest-based groups" and plan events, such as hikes, socials, or trips.

Niehaus is a young adult Catholic who lives in Arlington, Virginia, just outside of Washington.

The app's primary focus is on young adults.

"They are the group most in need of community, as most are not yet married and the majority have been recently divorced from their college community," Niehaus said. The project was inspired after he saw many young adult Catholics express a desire to meet each other and socialize with other Catholics, but not having any easy way to do so.

"No one stays after Mass to talk, and very few people attend parish events, so it's difficult to meet everyone within our parish, let alone our diocese," he said. "This unfortunately means that we miss out on the vast majority of what would have been the best possible relationships, whether romantic, platonic, or professional."

Niehaus told CNA that he had experienced this personally, explaining that while in New York for a conference, he met someone who lived nearby in Washington and with whom he connected and became friends.

"It's a pity that he and I had to go all the way to New York to connect with someone who lived five minutes away," he said.

"In Protestantism, there seems to be a strong and near-ubiquitous expectation of active engagement: everyone speaks to each other before and after church; everyone joins a Bible study; everyone hangs out with each other outside of that hour on Sunday," he said, calling it an "expectation that's matched with empowerment," something he sees as lacking among Catholic parishes.

Catholics "have a comparatively low level of empowerment," he said, citing a limited number of opportunities for young adults to participate in parish life, and limited resources of in parishes to cater to every interest.

"Most [young adult Catholics] won't sing in a choir," he said, but "many would love to host an after-Mass brunch, or go on a hike, or pursue one of their more niche interests that parishes...don't have the resources to sponsor."

Washington was chosen to launch the app, Niehaus explained, because it has both a strong Catholic presence and one that is "highly fragmented," which results in young adults being "siloed" from each other. He called the area "a great place to test [the creators'] hypothesis that Catholics want to connect with each other across parishes."

Additionally, he said that having lived in the area, he knew that the priests, parishes, and bishops are "especially eager and committed" to better engage the young adults who live in the Archdiocese of Washington and the Diocese of Arlington.

Niehaus believes that Koin will be addressing a presently under-served in parish life, that will result in more connections and activities to better engage young adults. He pointed out how apps like Airbnb and Uber "unlocked a previously untapped supply of houses and cars, respectively," which is something Koin is aiming to do with events and community.

"The idea is that Catholics can find other Catholics who share their interests and passions, so that can include, in theory, everything from running to knitting to skydiving, or worshipping," he said.

Groups and events that run counter to Church teaching will not be allowed on the app, and users will have the ability to block or report certain users if the they behave inappropriately either on the app or in person.

The goal of creating community amongst young adult Catholics is an important one, Niehaus said. He cited research which suggested that more than one in 10 Catholics leave the Church due to a lack of community, something that he hopes his app is able to address.

"We have seen first-hand and through others the pain that our brothers and sisters are suffering: loneliness, isolation, anxiety, frustration," he said. "We've seen that and worse: dear friends leaving the Church completely for reasons that aren't outside of our control."

"Koin isn't a panacea, but we--and the hundreds of young adult Catholics who've signed up in the DC area--think it's a step in the right direction," he said.

While Koin will be launching first in the Washington area, Niehaus said that there are plans to expand the app's presence to other major metropolitan areas, such as Baltimore, Philadelphia, New York City, and Los Angeles.