In his annual address to diplomats Thursday, Pope Francis stressed that solidarity is needed in 2020 to overcome polarization for the sake of the poor, who suffer when the common good is disregarded. 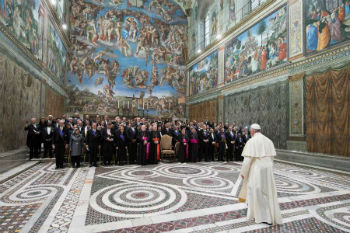 Vatican City, (CNA) - In his annual address to diplomats Thursday, Pope Francis stressed that solidarity is needed in 2020 to overcome polarization for the sake of the poor, who suffer when the common good is disregarded.

"Greater polarization does not help to resolve the real and pressing problems of citizens, especially those who are poorest and most vulnerable, nor can violence, which for no reason can be employed as a means of dealing with political and social issues," Pope Francis said Jan. 9 in the Vatican's Sala Regia.

The pope told diplomats accredited to the Holy See that peace and integral development are the principal aims of the Holy See's diplomatic involvement in the world.

"Sadly, the new year does not seem to be marked by encouraging signs, as much as by heightened tensions and acts of violence," Francis said.

"Particularly troubling are the signals coming from the entire region [the Middle East] following the heightening of tensions between Iran and the United States, which risk above all compromising the gradual process of rebuilding in Iraq, as well as setting the groundwork for a vaster conflict that all of us would want to avert," he said.

The pope called for a more steadfast engagement of the international community in the Middle East, particularly in rebuilding war-torn Syria. He also decried the world's indifference toward "the most serious humanitarian crisis in recent history" in Yemen.

He urged the international community to support African countries to "eliminate the scourge of terrorism that is causing more and more bloodshed in whole parts of Africa."

"It is painful to witness, particularly in Burkina Faso, Mali, Niger and Nigeria, continuing episodes of violence against innocent people, including many Christians persecuted and killed for their fidelity to the Gospel," the pope said.

The pope said he hopes the new year will also bring a consistent international response to the problems facing internally displaced persons, who do not always receive the protection they deserve.

Looking ahead to 2020, Pope Francis said the upcoming 75th anniversary of the founding of the United Nations provides the opportunity to reform the multilateral diplomatic system, beginning with the UN, to make it more effective in the present geopolitical context.

"Rights are intrinsically grounded in human nature itself. Whenever the lexicon of international organizations loses a clear objective anchoring, one risks fostering estrangement rather than rapprochement between the members of the international community, with the consequent crisis of the multilateral system, which is now sadly evident to all," he said.

Pope Francis said that the UN climate change conference in Madrid last month raised "serious concern about the will of the international community to confront with wisdom and effectiveness the phenomenon of global warming."

He said the issue of climate change should not be "reduced to an elitist concern," adding that the response of international politics to climate change has been "very weak."

The pope stressed the need for education of young people to "form mature individuals capable of overcoming division and antagonism, and to restore the fabric of relationships for the sake of a more fraternal humanity" in many societies where solidarity is lacking.

"There is, in fact, a tendency, in many parts of the world, to be self-absorbed, to defend acquired rights and privileges, and to view the world within a narrow horizon that treats the elderly with indifference and no longer welcomes the newborn. The general aging of the world population, especially in the West, is a sad and emblematic example of this," Francis said.

He said that 30 years after the fall of the Berlin Wall, it is still easy to erect barriers.

"The Berlin Wall remains emblematic of a culture of division that alienates people from one another and opens the way to extremism and violence. We see this more and more in the hate speech widespread on the internet and in the social communications media. Rather than walls of hatred, we prefer bridges of reconciliation and solidarity; rather than what alienates, we prefer what draws people closer together," he said.

Pope Francis said that he witnessed solidarity and signs of peace and reconciliation during his apostolic visit to Africa last year.  He reflected on his seven apostolic journeys to 11 countries in 2019, the year with the most visits outside of Italy in his pontificate.

"A world without nuclear weapons is possible and necessary," the pope told diplomats, repeating his message from his visits to Hiroshima and Nagasaki in November.

Pope Francis said that the Review Conference of the Treaty on the Non-Proliferation of Nuclear Weapons in New York in April and May will be critical to find consensus on ways to implement this international legal instrument.

"Hope requires courage. It means acknowledging that evil, suffering and death will not have the last word, and that even the most complex questions can and must be faced and resolved," he said.

The 70th anniversary of the proclamation of the Assumption of the Blessed Virgin Mary this year "invites us to look ahead to the completion of our earthly journey to the day when justice and peace will be fully reestablished," Pope Francis said.