It was a pleasant November morning in downtown Denver when volunteers with the Knights of Columbus set up tents for distributing new puffy winter coats, as well as snacks, socks and water, to homeless people. 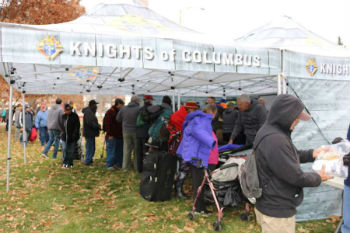 Denver, Colo., (CNA) - It was a pleasant November morning in downtown Denver when volunteers with the Knights of Columbus set up tents for distributing new puffy winter coats, as well as snacks, socks and water, to homeless people.

But while roughly 150 people waited in line for the giveaway to start Nov. 20, the temperature outside crept down. The coats were coming just in time; a forecasted snowfall seemed likely as the afternoon approached.

Serena waited in line with a friend. She was looking forward to a new coat, she said, because her old one was getting too small.

Ted, who was at the front of the line in a worn red Marlboro coat, found out about the coat drive at Holy Ghost Catholic Church in downtown Denver, which distributes food to the homeless.

"It means a lot to me. My coat's dirty, I need a new coat. And it's going to snow tonight," he said.

Ted was eyeing the more colorful coats that were laid out on white plastic tables in the tent, waiting to be tried on and given away. He might take the blue and orange one, he said, because those are the colors of the Broncos, Denver's NFL team.

Tracey sported a pink hat and yellow sunglasses while she waited in line for her coat. She said was excited to see some of her friends from Christ in the City, a Catholic mission for the homeless, at the event.

The giveaway was held in Lincoln Memorial Park in front of the state capitol building at the same time as Christ in the City's weekly Lunch in the Park, an event that is just as it sounds. Hundreds of people got in line for lunch and then a coat, or first got a coat and then some lunch.

The coat giveaway for homeless people in Denver was a pilot event for the Knights, who are looking at replicating the event in other cities.

The project is similar to the Knights of Columbus' Coats for Kids project, a national coat giveaway for children that the Knights have sponsored in the United States and Canada since 2009.

"We just felt that we needed to expand this program to the homeless. We've listened to Pope Francis and his word about taking care of the homeless, and we felt that this was one way that we can give the gift of warmth to people in need," Knights of Columbus Supreme Secretary Michael O'Connor told CNA.

"We're going to be getting bad weather tonight, there are two inches of snow predicted for tonight, so it's the perfect time to be giving people new coats," he said.

The giveaway also came just three days after the World Day for the Poor, which Pope Francis celebrated in Rome by having a meal with 1,500 homeless people.

"We're just bringing the World Day of the Poor to Denver three days later," O'Connor said. "So it's in line with the mission of the Catholic Church, and we believe that we need to take care of those in need."

O'Connor was one of several Knights who came from the organization's national office in New Haven, Connecticut for the event.

The Supreme Council paid for and shipped more than 600 new winter coats and other supplies to Denver for the event, where they coordinated with local Council #539, located roughly two blocks away from the park where the giveaway was held.

"We have a lot of history in Denver," O'Connor said. "The first council in the west was in Denver, it's over 119 years old, it's located 2 blocks from here. So for us, it seemed natural to have this event in conjunction with that council."

Denver is also rich in resources for the homeless. Organizers with the Knights told CNA that they coordinated with Christ in the City because of the mission's extensive experience working with the homeless and putting on events in the city park.

Sean Pott, a Denver native who now works in the national office in the department of Fraternal Mission, said he had the idea to do an event for the homeless in Denver because of the resources available there. Pott chatted with those in line for coats as they waited for the event to officially start.

"Sean had the idea to reach out on another level," Andy Wheaton, a managing general agent in the insurance program of the Knights of Columbus, told CNA.

"It's faith in action, and Christ in the City has been doing this a long time, and Sean (knows) the missionaries so he coordinated with them," Wheaton added. "We're using their rules and how they do everything."

Wheaton said the missionaries held a training for the Knights last night about best practices when working with the homeless, including safety tips and easy topics for conversation.

Wheaton, who is local to Denver, said he was excited to see the collaboration with Christ in the City, a mission familiar to his family, and to be able to partake in the charitable event.

"Even though I work for them, I joined the Knights for this reason," Wheaton said.