Yes, there's a link between abortion and school shootings

Saugus High School students who walked out of classrooms during the March for Our Lives protest in 2018 have been victimized in today's school shooting in California. 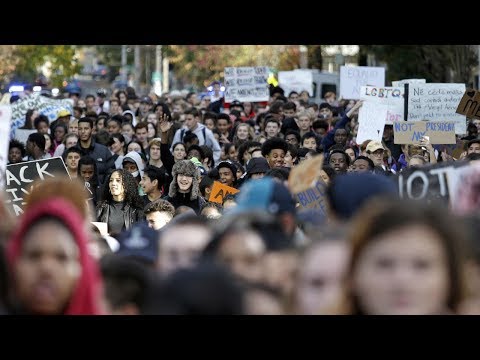 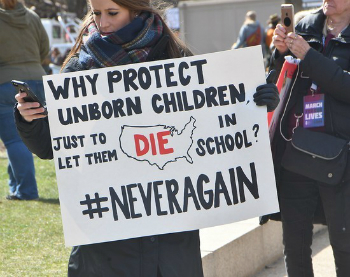 A March for Our Lives protester asks why we try to protect the unborn, but not kids in school. The answer is that we must protect both, beginning with a new respect for God, morals, and life.

LOS ANGELES, CA (California Network) - One student has died and two others are in critical condition following a shooting at Saugus High School in Santa Clarita, California. Officials say six students were transported to area hospitals. The deceased student has been identified as a female victim, but her name has not been released. All victims are students at the school. Police report they have a suspect in custody. That suspect is a 15-year old male.

There are unverified reports the suspect posted threats on social media prior to the attack.

Santa Clarita is a city nestled in the mountains about 40 miles north of Los Angeles. Saugus High is a suburban school. Students from the school walked out in 2018 during the March for Our Lives protests. Those protests saw students across the nation walk out of classes for a period of fifteen minutes. The purpose was to inspire legislators to pass tougher gun control legislation. While the protests have generated sympathy, they have not resulted in significant changes to firearm laws.

Now some students who participated in those protests have been victimized in today's shooting.

While mass shootings happen all over the world, the United States suffers disproportionately. Other nations see higher rates of gun deaths, but all such nations are poor and distressed. The United States is unique as it is the most dangerous nation for gun violence among industrialized, western nations. The reason is the United States has liberal firearm laws compared to much of the western world. Firearm ownership is recognized as a right, and there are powerful interest groups that work to maintain that right.

However, respect for firearms is not institutionalized the way it is in other nations with high rates of firearm ownership. Schools do not teach students how to keep and care for firearms, although many schools once did decades ago. Schools also lack moral education.

As a society, the United States embraces "throwaway culture" and this applies to humans as well. The United States aborts children at the rate of almost one million per year. The nation is also home to the world's largest population of incarcerated persons.

There are many factors driving mass shootings in the United States. There's lack of belief in God, a lack of morals, and little respect for firearms. There's a disturbing lack of mental healthcare, which is also prohibitively expensive. The culture sees human life as disposable. And firearms are easy to obtain. The solution to the crisis is multifaceted.

Unfortunately, the only discussion taking place in public is how to restrict access to firearms in a nation awash in them. Unless the other factors feeding the problem are addressed, nothing will be improved, even if the strictest gun control laws were passed.

We must pray for an end to violence, which can only come from a new respect for God, life, and our natural, God given rights. Unfortunately, when we see life as disposable, school shootings naturally follow; they're a symptom of a much greater problem.