Over 400 lawsuits were filed in New York state on the first day of a one-year window in the statute of limitations, allowing abuse survivors to file suit against their abuser or the institution where the abuse occurred. 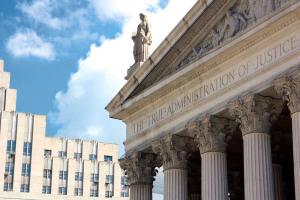 Albany, N.Y., (CNA) - The lawsuits include an allegation against a sitting bishop and a RICO suit against the Diocese of Buffalo and the Northeast Province of the Jesuits. Other suits were filed against laicized former archbishop Theodore McCarrick, and against retired Bishop Howard Hubbard of Albany. Hubbard has denied the allegations.

The one-year window was created through the Child Victims Act, which altered New Yorkâ€ s statute of limitations for filing criminal claims and civil claims for survivors of child sexual abuse. Previously, a survivor had until they reached the age of 23 to file either claim. This has now been changed to 28 for criminal charges, and 55 for civil cases.

The one-year window began six months after the passage of the law. The Catholic Church, Boy Scouts of America, and the stateâ€ s public schools all stated they were prepared for a potentially large number of abuse survivors to file lawsuits.

It is unclear how many of the 427 suits concerned the Catholic Church or a member of the clergy, and some lawsuits contained multiple plaintiffs making a claim against the same person.

Over 45 patients filed a lawsuit accusing an endocrinologist at Rockefeller University Hospital of sexual abuse. An additional suit was filed by a woman who says she was raped by recently-deceased convicted sex offender/financier Jeffrey Epstein and three of his associates.

The most high-profile Catholic accused in a suit is Bishop Robert Guglielmone of Charleston, South Carolina. Guglielmone is accused of misconduct dating back 40 years ago, when he was a priest in the Diocese of Rockville Centre, which comprises most of Long Island.

The suit alleges that Guglielmone sexually abused a young man over a period of years while he was serving as pastor of St. Martin of Tours parish in Amityville.

Previously, the accusation had been determined by Church authorities to not be credible, according to a statement released to local media in Charleston, though the diocese stressed that civil law enforcement had been informed.

A new, Vatican-ordered investigation is now underway, though it is unclear who is undertaking the investigation.

In a statement, Guglielmone denied all the accusations and said that he was looking forward to establishing his innocence.

"I offer my prayers daily for those whose lives have been hurt or devastated by the actions of a member of the clergy or by any other persons, especially all abused children and other vulnerable persons," Guglielmone said.

"It is particularly tragic when the abuse is at the hands of a priest in whom their spiritual care and well-being has been entrusted."