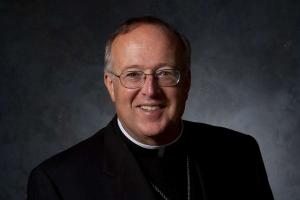 San Diego, Calif., (CNA) - He also called on all diocesan employeesâ€" not just those who are mandated reporters under the lawâ€" to contact the appropriate authorities if they "come to a strongly founded belief that a minor is being victimized sexually."

"I would suggest that if you are not a mandated reporter, but come across evidence which points in your mind to the existence of the sexual abuse of a minor either within the life of the Church or in their family or social lives, and you are unsure how to proceed, you consult with one of the experienced mandated reporters at your school, parish or agency to come to clarity on what you should do," the bishop said.

"I would ask those of you here today who are not mandated reporters to keep in mind that both the moral law and the civil law urge you to report known or suspected instances of the sexual abuse of a current minor to child welfare services."

The bishop announced the program and the new policies in front of 2,500-plus employees of the parishes, schools, and organizations in the San Diego diocese. Currently, under a change in California law passed last December, the statute of limitations for sexual abuse is 10 years after the last act or attempted act of sexual assault.

"It includes all forms of physical or sexual abuse that might be encountered by church workers at school, in the parish or in the community," he told CNA.

Eckery also clarified that the bishop was encouraging those who suspect abuse to go directly to law enforcement, but also to alert the diocese.

"Mandated reporters under California law are supposed to go directly to law enforcement," he said.

"So it's not a matter of waiting for approval or running it up the chain...for the non-mandated reporters, he was giving them complete license to do the same, to go directly to law enforcement or whatever the proper civil authority is. But in all cases we are anticipating that people will alert us so that we can track these reports at the diocese to make sure everything is followed up on."

Money for the victim compensation fund will come from diocesan funds and insurance; no parish funds will be used, nor money raised through the dioceseâ€ annual appeal, the diocese said.

"Victim/survivors of abuse by a priest of the San Diego diocese will be invited to apply for compensation regardless of when the abuse occurred. Undocumented immigrants may also apply. There will be no statute of limitations," the diocese said in a release announcing the program.

"It will be forbidden for any employee or clergy in the diocese to communicate privately with a specific minor whom he/she has come to know through ministry without copying that minorâ€ s parent or guardian. Moreover, it will be forbidden for any cleric or employee to have any direct interaction on any personal media account with any individual minor whom they have met through their work in the Church," McElroy said.

Eckery said the new social media policy was not a response to any specific incident of inappropriate communication between a diocesan employee and a minor.

"It's more based on a feeling of what's right," he said. "It's really meant to avoid problems, rather than address problems that exist."

"We'll promulgate [the new rules] in written form as soon as we have everybody informed on the software changes, the updates, just so that we don't tell people not to do something before we give them a solution."

The bishop also announced the creation of a Task Force, headed by diocesan Chancellor Marioly GalvĂˇn and Director of Schools John Galvan to "focus upon designing pathways for our local Church to bring to our parents and families a deeper understanding of the pervasiveness, patterns and damaging effects of the sexual abuse of minors."