Parishioners of St. Francis of Assisi Parish in the Archdiocese of Portland staged a protest against their pastor during a June 30 Mass. 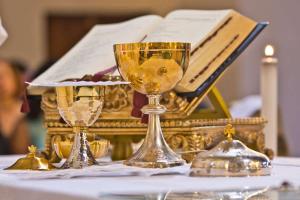 KPortland, Ore., (CNA) - The Oregonian uploaded a video of the protests Aug. 11. The video shows elderly parishioners dressed in white, carrying signs into the assembly during the Eucharistic consecration, and attempting to shout down the pastor, Fr. George Kuforiji, during the Mass. Other parishioners are shown looking visibly uncomfortable at the disturbance.

The protests reportedly concern Fr. Kuforiji's decision to remove unauthorised changes to the liturgy which had become common in the parish over previous years, and to take down a sign at the entrance to the church saying "Immigrants & Refugees welcome."

Fr. Kuforiji, himself a Nigerian immigrant who was ordained in 2015, was installed as pastor of St. Francis of Assisi in 2018.

Prior to his arrival, The Oregonian reported, St. Francis was known for "progressive liturgy" that "embraced folk music" during Mass.

After arriving at the parish, Kuforiji reportedly insisted on using only Church-approved liturgical texts during the Mass. The texts refer to God as "He," "Lord," or "King," instead of the gender neutral terms "God," and "Creator" that had become customary replacements during parish liturgies.

Kuforiji also stopped the practice of reading a "community commitment" after the recitation of the Nicene Creed.

The video shows protesters shouting their own intercessory prayers over the pastor's voice, and reciting the community commitment during Mass as a form of protest against Fr. Kuforiji's changes. Some parishioners have also reportedly refused to kneel during the Eucharistic consecration, in defiance of a recent instruction from Portland Archbishop Alexander Sample.

The protests began in late June, when some of the parish's handmade vestments were found in a trailer slated for the dump. According to The Oregonian, Fr. Kuforiji insisted that he had not intended to throw away the rainbow-bordered chasuble and other liturgical garb, but had intended that the vestments be placed in a storage box.

A parishioner, Albert Alter, found the vestments and accused Kuforiji of "trying to destroy the parish."

"I don't know anyone that would come to a parish and go to the vestment closet and take all the vestments, still on hangers, and throw them into a trailer without somebody of authority having instructed them to do so," Alter told The Oregonian.

"We have been wanting real dialogue. I said that we are being abused. We are being abused in the Catholic Church by this priest, and by this archbishop," said Melinda Pittman, a 30-year parishioner of St. Francis, filmed speaking at the lectern after Mass on June 30.

In the video, cries of "yes," along with the sound of shaking maracas, are heard from the pews after Pittman states the parish is being "abused" by the priest.

At the end of the speeches following Mass on June 30, a group of parishioners confronted the priest, who can be heard saying "we are reverencing God."

The demonstrators then linked arms and sang "We Shall Overcome," a Gospel song typically associated with the civil rights movement in the U.S., in protest of the African-born priest.

Another attendee supporting Fr. Kuforiji as a "holy priest," was told "you don't belong here" by others in the assembly.

Tom Hogan, a 76-year-old parishioner of St. Francis and one of the few remaining parishioners who attended its grade school, told The Oregonian that many of the liturgical deviations at the parish were instituted by former pastor Fr. Donald Durand.

Durand's priestly faculties were withdrawn shortly after his retirement from active ministry in 2001. He has been accused of molesting more than a dozen preteen and teenage boys, some of whom were students at St. Francis Assisi School, and numerous lawsuits against him have reportedly been settled.

Durand was pastor at St. Francis from 1970 until 1983. He has denied all allegations of misconduct.

A statement from the Archdiocese of Portland said that the archdiocese is "happy to be working with Fr. George Kuforiji, Pastor of St. Francis Parish, to revitalize the parish so that it is able to better serve the growing population in the area as well as future generations of Catholics in Portland."

The Oregonian also reported that since late June, Mass attendance at St. Francis has dropped, and the entire choir quit and that Catholic Charities of Oregon took control of the parish's St. Francis Dining Hall, which feeds local homeless people, in early August for a temporary, three-month period.

"The Archdiocese of Portland is excited to work with the City of Portland, Catholic Charities of Oregon and the local community to re-establish St. Francis Dining Hall as a beacon of light and mercy serving those most in need," the archdiocesan statement said.