A pair of petition campaigns for a people's veto referendum vote have kicked off in Maine with the support of the state's Catholic bishop, as residents attempt to repeal a law that legalizes taxypayer-funded abortion, and another one that legalizes assisted suicide. 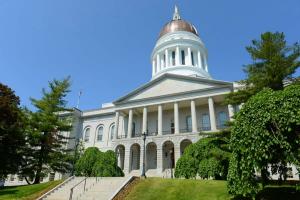 Portland, Maine, (CNA) - Maine Gov. Janet Mills (D) has signed two pieces of legislation that have caught the ire of the state's pro-life and Catholic communities during her short tenure as governor. The first, LD 820, "An Act To Prevent Discrimination in Public and Private Insurance Coverage for Pregnant Women in Maine" was passed by the legislature in mid-May and was signed into law shortly thereafter.

LD 820 requires that MaineCare, the state's Medicaid program, and other insurance companies that offer plans in the state, cover abortion services if they also cover maternity benefits.

"Good citizens who diligently pay their taxes are being forced to fund abortions, with no way to avoid the reality that they are paying for an immoral act," said Bishop Robert Deeley of the Diocese of Portland in a letter to his diocese dated July 18.

"This is not simply a religious issue. It is about human dignity of a law's attempt to rob individuals families of their right to respect that dignity from conception to natural death," he said.

The laity in the state have "a clear role to effect a successful opposition" to this law, said Deeley, who urged the state's Catholics to sign the petition to recall the bill.

"It is my hope that this law, while respecting the right to personal liberty, will be used sparingly," Mills said prior to signing the bill. She also added that she hopes the people of her state would "be as vigorous in providing full comfort, hospice and palliative care to all persons, no matter their status, location or financial ability as we are in respecting their right to make this ultimate decision over their own fate and of their own free will."

Deeley also released a letter July 18 reiterating his opposition to assisted suicide and promoting and supporting the effort to recall LD1313.

"We can be grateful that God created us with the inner gifts of love and mercy, and thankful that our country affords us the opportunity to defend that which we believe," said Deeley.

"Several organizations outside of the Church are leading a 'People's veto' against physician-assisted suicide. As your bishop, I support this effort and urge you to have your voice heard."

Teresa McCann-Tumidajski, executive director of Maine Right to Life, told CNA that she believes the new laws are motivating the state's pro-life movement into action.

"The recent radical taxpayer-funded abortion law and doctor-prescribed suicide law have re-vitalized pro-life Maine like never before in recent history," she said. "We have an enormous groundswell of enthusiasm at the grassroots level."

McCann-Tumidajski stated that she is committed to defending life in the state, in order to "protect our most precious resource: our people!"

"Above all else, this is a spiritual battle," she said, and she requested prayers as Mainers work "to fight, to protect, to support, and to defend vulnerable human life in our beautiful state."

In both campaigns, organizers will have to gather a total of 64,000 signatures from registered Maine voters in order for the bills to qualify for a statewide referendum.