An auxiliary bishop in the Archdiocese of Cincinnati, and member of the USCCB committee on child protection, is facing accusations that he failed to report to Cincinnati's archbishop a series of allegations that a priest had engaged in inappropriate behavior with teenage boys. 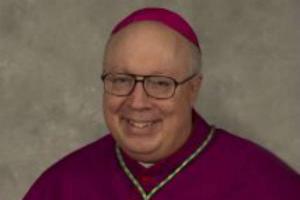 Cincinnati, Ohio, (CNA) - After CNA presented its investigation to the archdiocese, a spokesperson said that Bishop Joseph R. Binzer would be removed from his position as head of priest personnel, effective immediately, while the archdiocese begins its own internal investigation.

The archdiocese has not removed Binzer, 64, from his post as archdiocesan vicar general, a position of authority second only to the archbishop. Binzer is also a member of the U.S. bishops' conference committee for the protection of children and young people.

Binzer could face further disciplinary action by Cincinnati Archbishop Dennis Schnurr, and is likely to undergo a formal investigation under the provisions of Vos estis lux mundi, a recently promulgated policy for dealing with bishops who fail to properly handle allegations of sexual abuse or misconduct.

According to sources familiar with the case, it emerged recently that Binzer was told in 2013 about allegations concerning recently suspended priest, Fr. Geoff Drew, and failed to disclose those allegations to Schnurr and other officials of the archdiocese.

Diocesan officials confirmed to CNA that in 2013, Binzer received a report that Drew had had inappropriate contact with minors at St. Maximilian Kolbe Parish in Liberty Township, Ohio.

The contact consisted of uninvited hugs, shoulder massages, patting legs above the knee, and inappropriate sexual comments about body and appearance, all directed at teenage boys.

At the time, the complaint was forwarded to Butler County authorities, who found no evidence of criminal behavior. While the archdiocesan victims' assistance coordinator, who reported to Binzer, was aware of the allegation, the information was not made known to the diocesan priest personnel board or Archbishop Schnurr.

In 2015, similar allegations were again made against Drew while he was still at St. Maximilian. Again the matter was forwarded to Butler County officials, who determined that the activity was not criminal. Again, Binzer reported neither the complaints nor the investigation to the archbishop or informed the priest personnel board.

Despite the allegations concerning behavior that would meet the level of "grooming," sources in the archdiocesan chancery told CNA that Binzer met with Drew twice, was assured by him that he would reform his conduct, and considered this sufficient.

In early 2018, Drew applied for a transfer to St. Ignatius of Loyola Parish in Green Township, which is attached to the largest Catholic school in the archdiocese.

Neither the board nor the archbishop were made aware of the multiple complaints against Drew, and the transfer was approved.

The allegations were also reportedly not recorded by Binzer in the priest's personnel file that would have been available to the archdiocesan personnel board as part of the process.

One month after Drew's arrival at St.Ignatius, a parishioner at St. Maximillian resubmitted the 2015 complaints about the priest. The complaint was again reported to Butler County officials, but this time it was also brought to the attention of Archbishop Schnurr.

Sources close to the chancery told CNA that because Binzer failed to notify the archbishop or the priest personnel board about the previous allegations he had received, the accusation was believed by them to be an isolated incident.

Drew was asked to restrict his involvement with the school and was assigned to meet regularly with a "monitor," but school faculty and administration were not told about these restrictions, or the reasons for them.

During a diocesan investigation into the 2018 complaint, Binzer received an additional complaint of similarly inappropriate contact by Drew, this time from his time as a high school music teacher, before his ordination as a priest.

Following a diocesan investigation, Drew was ordered to attend counselling with a psychologist.

On July 23, Drew was removed from ministry at St. Ignatius, when it emerged that he had sent a series of inappropriate text messages to a 17-year old. Sources in the archdiocese told CNA that Drew persistently sent the teenager messages after obtaining the boy's number from his older brother, and that the matter came to light when the boy's father discovered the messages.

Both the archdiocese and Hamilton County prosecutors have said there is no indication that any civil laws have been broken, but school officials told local media that they had been given no warning about previous allegations of misconduct against the priest.

A source told CNA that it was only after the recent incident at St. Ignatius that archdiocesan officials discovered that the otherwise undisclosed complaints about Drew had been made to Binzer, and that the auxiliary bishop had failed to report them to other diocesan officials, or raise them during the decision to approve his transfer in 2018.

According to one senior chancery official, Drew's assignment to St. Ignatius would "never have happened" had Schnurr and the archdiocesan personnel board been aware of the allegations reported to Binzer.

In a statement released to CNA Monday morning, Archbishop Schnurr said that he is "working on personnel and procedural changes to be announced in the very near future to ensure that every member of the Priest Personnel Board has complete insight into a priest's background and profile before an assignment is made."

"We obviously made serious mistakes in our handling of this matter, for which we are very sorry," Schnurr said.

While the archbishop's statement did not address Binzer's role directly, senior sources in the archdiocese told CNA that Schnurr had "gone nuclear" when he discovered the situation.

"The archbishop was as mad as I have ever seen him. When he was told that Bishop Binzer had withheld information, well, he used words I have never heard him use before," one senior source told CNA, saying Schnurr called Binzer's actions a "firestorm" for the archdiocese.

"Binzer told the archbishop that nothing criminal had happened, he believed it was all in the past for Drew, and that Drew had 'the right to his good name.' It did not go down well."

Senior sources in the archdiocese told CNA that Schnurr spent the weekend considering options for further action against Binzer, including his removal as vicar general and possibly from any executive role in the archdiocese.

"That's an ongoing conversation, and the archbishop is considering what his options are."

The failure of bishops to act on allegations of sexual misconduct and abuse has been the locus of several successive scandals in the Church in the past year. In addition to accounts that accusations against former Archbishop Theodore McCarrick were ignored by Church authorities over a period of years, the release of the Pennsylvania grand jury report revived criticism of past occasions where bishops ignored complaints against predator clergy.

The allegations that Binzer internally withheld the allegations against Drew come just weeks after the USCCB met in Baltimore to adopt measures aimed at building processes to address episcopal misconduct or neglect, and the ongoing crisis of credibility widely perceived to overshadow ongoing work to eliminate sexual abuse from the Church. These measures included a set of directives applying in the U.S. the new universal norms for investigating allegations against bishops promulgated by Pope Francis in Vos estis lux mundi and which came into force on June 1.

The USCCB's child protection committee, on which Binzer sits, is charged with "advising the USCCB on all matters related to child and youth protection and is to oversee the development of the plans, programs, and budget of the Secretariat of Child and Youth Protection."

Binzer is the representative on the committee for the 13 dioceses of Ohio and Michigan. The bishop is a canon lawyer, who served in a variety of archdiocesan administrative and executive positions before becoming vicar general in 2007. He was consecrated bishop in 2011.