Bishop Mark Brennan will be installed as the ninth Bishop of Wheeling-Charleston next month, as West Virginia's sole diocese looks to move forward from the scandals of its previous leader, Bishop Michael Bransfield. 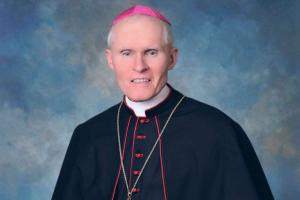 Wheeling, W.V., (CNA) - "It will be my highest priority to work with you on true reform and to open our hearts and minds to the healing power of Christ's unconditional love," Brennan said at the July 23 press conference announcing his appointment.

Officials in the diocese also emphasized healing and reform.

"Today is a new day in the Diocese of Wheeling-Charleston," Bryan Minor, Delegate of Administrative Affairs for the diocese said at the start of Tuesday's press conference.

Brennan's appointment comes after "many trials" in the 11-month period since Bransfield's resignation was accepted by Pope Francis, Minor added. Brennan's appointment was announced earlier in the day by Pope Francis.https://www.catholicnewsagency.com/news/pope-francis-names-mark-brennan-to-follow-bransfield-at-west-virginia-diocese-54200"We seek to pivot from the past to the promise of the future," said Minor.

For his part, Brennan began his own pivot to West Virginia early. During the press conference, he quoted extensively from "Country Roads," John Denver's ode to the Applachian mountain state.

Brennan's appointment follows recent revelations about the malfeasance of Bransfield, who is alleged have committed sexual assault and sexual harassment of adults, and abused diocesan funds to support a lifestyle that reportedly included drugs, private jets, and large cash gifts to Church officials.

Brennan did not mince words when discussing Bransfield, saying that "I want you to know how acutely aware I am of the deep disappointment and pain" the diocese has felt over the last year.

There is "no adequate excuse" for Bransfield's conduct, added Brennan, which has "harmed this community of faith.

After he is formally installed Aug. 22, he will work to "remove some obstacles, reducing others, and beginning the arduous work on reform, so we can move forward together as a local Church to honor, serve, and proclaim Jesus Christ," the bishop said.

Minor praised Brennan for his "simple lifestyle" and for his attention and interest in the pastoral needs of his parishioners. As bishop, Brennan will not live in the mansion previously occupied by Bransfield.

Brennan's appointment came as a surprise to some observers, given the bishop's age. Brennan is 72, and, like all bishops, will be required to submit his resignation to the pope at age 75.

The bishop said the while he prayed the Diocese of Wheeling-Charleston would find a good leader, he "never thought it would be me."

Brennan's archbishop in Baltimore, Archbishop William Lori, was the apostolic administrator over the Diocese of Wheeling-Charleston during the search for a new bishop. Lori also led the investigation into Bransfield's financial and personal misconduct, and, in March, banned Bransfield from public ministry in the diocese and archdiocese.

During the press conference, Brennan was asked to elaborate on how Bransfield will be censured for his misconduct. On July 19, the Vatican announced sanctions on Bransfield, and forbade him from living in the diocese, celebrating Mass in public, and requiring him to "make amends," as decided by his successor. Brennan was asked to clarify what "amends" might consist of.

The bishop said that he would have to discuss the matter with the Holy See, and consult with Catholics in West Virginia. He said he would pursue a just remedy "to the extent that's possible."

Brennan also defended the fact that Bransfield was not laicized and removed from the clerical state, as was former archbishop Theodore McCarrick, because, he said, the Church is still able to exert some sort of control over the bishop. McCarrick was also found guilty of sexual misconduct.

"Not being thrown out, he is still subject to the authority of the Church," said Brennan. "I'm hopeful that will be enough to get him to cooperate."

Emphasizing a move forward, Brennan said it is necessary for the Church in West Virginia to "put our trust in God and recommit ourselves to the fundamental mission of his Church."