DC priest: celibacy allows a priest to give himself for others

Commentators and critics, Catholic and non-Catholic alike, have in recent months called for an end to the discipline of priestly celibacy, especially in the wake of revelations of widespread historical sexual abuse in the United States, and in response to a perceived dearth of priests in some parts of the world. 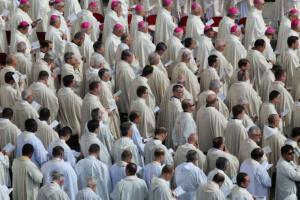 Denver, Colo., (CNA) - "We cannot bring about real reform of the Roman Catholic priesthood unless we do away with mandatory celibacy for diocesan priests in the Latin rite," Washington D.C. priest Peter Daly wrote in a July 15 op-ed for the National Catholic Reporter.

Father Carter Griffin of the Archdiocese of Washington, author of "Why Celibacy? Reclaiming the Fatherhood of the Priest," told CNA in an interview that celibacy has been intrinsically linked to the Catholic priesthood from the very beginning, when Jesus, who was himself celibate, ordained the apostles as the first priests.

Christ enjoined celibacy on some of his disciples, Griffin said, and others who were already married practiced marital continence" abstaining within marriage" after becoming priests.

"Celibacy allows for a certain openness of heart, kind of wideness of heart, which facilitates a man's capacity to live his priesthood, and to give himself to others,' Griffin said.

"[Jesus] really had to be available to everyone...if his heart had a privileged share [of love] going to his wife or children, he simply couldn't do what he intended to do. And I think that sense of being ordered to love as a priest, priestly love, and really spiritual fatherhood...is in my opinion one of the main reasons, if not the main reason, for celibacy."

Celibacy also points to the existence of God and supernatural realities, Griffin said, by reminding others that "our highest goods are not earthly pleasures, but in fact even greater and higher."

Daly argued in his op-ed that priests who are allowed to marry and have children will better understand their role as spiritual fathers.

"With real parents in the priesthood, it would make us more aware of the vulnerability of children and more outraged at their abuse," Daly wrote.

Griffin admitted there could be some truth to that claim, and said that a seminarian's natural father has an important and often overlooked factor in the formation of new priests. But the benefits of understanding different forms of fatherhood also could work in the other direction, he said.

"There are many things I've learned as a spiritual father that have proven to be very helpful to the many natural and biological fathers that I am close to and get to know," he said.

"The question comes, at what cost?" he cautioned, however.

"There is going to be this sort of challenge of living these two vocations [marriage and the priesthood] in the way that they're really both demand to be lived."

Daly also argued that celibacy restricts the pool of eligible candidates for priesthood and "diminishes its quality," while fostering "a culture of mendacity and secrecy, which contributes to sexual cover-ups," as well as being physically unhealthy for men.

Responding to the objection that allowing married priests would cause an uptick in vocations, Griffin said this could be true" at first" but presented some major caveats.

"There are plenty of mainstream denominations which just have not married clergy, but women clergy, and all these other restrictions lowered, and they still can't find enough," he pointed out.

"So the idea of this being some kind of magical cure, 'just let them get married and suddenly the seminaries will burgeoning and everyone will be back to 1955,' is a little bit false."

In addition, Griffin said that in his opinion the vocations crisis would not be solved by lowering the requirements of the priesthood, because although the numbers may tick up slightly, the overall quality and holiness of the priests will likely not improve.

"If the right thing for us is celibate priests, then let's figure out how to build the Catholic culture as it's been done every time that this question has come up from century after century...I think we need to change what is causing the dearth in vocations, rather than simply change the standards for entering seminary," he said.

On the question of whether a celibate life leads to dangerous sexual repression, which in turn leads to abuse, Griffin pointed out the many healthy and well-adjusted celibate people" both Catholic and non-Catholic" who throughout the centuries have sacrificed sexual relations for some sort of a higher good.

"An objection like that could only be made in a culture that is suffering from the aftershock of the 'Sexual Revolution,' which has tried to convince us that we really cannot control ourselves sexually, that the sexual urge is something that simply has to be indulged, and any restrictions on it are necessarily unhealthy," he commented.

"All of us know people who are not married who are wonderfully balanced and good people. And the vast majority of priests are happy in their vocation and are doing good work and faithful. So to take some examples from the headlines and to draw universal conclusions from them seems to be not the right move."

"I think here the problem is a lack of priestly zeal, or a lack of justice, or a lack of a sense of the purpose of the priesthood. Because the purpose of the priest is not to garner power for himself, in this kind of clerical mindset, but it's to pour himself out for others. His whole purpose in life is to serve...and so if we're not doing that, if we're not setting an example, or we're not pouring ourselves out in that way, let's focus on that problem, instead of saying 'it's a boy's club' or something like that."

Specifically on the "boy's club" objection, that a married priesthood would foster greater respect for women among a mostly male culture in places like seminaries, Griffin said an attitude of "clerical arrogance" does exist in some places, but not a majority.

"I think in good formation and good seminary culture, I don't see any of that," he said.

"I see brothers growing together and really thriving and striving for holiness in their Christian lives and encouraging each other, and that kind of building of a fraternal and paternal bond among these men I think will bear tremendous fruit."

In terms of helping to build a Catholic culture in which priestly celibacy can truly work, Griffin said it's important for young men to see celibacy, and chastity in general, modeled for them in a joyful way, whether they plan to enter the priesthood or not. He also mentioned the importance of fostering a family culture where vocational discernment is taught and valued.

Finally, he said an emphasis on chastity, especially in a hyper-sexualized culture, should help to counterbalance the deadening and dulling effects of such things as internet pornography, which he said make "seeing the beauty of chastity, let alone the beauty if celibacy, more difficult."

"I think having parents who really take seriously the healthy and integral formation of their children to really grow up to become holy men and women, really authentically Christian, living chaste, holy, purity...I think the vocations crisis would frankly disappear, if we really could redouble our efforts as Catholic families in those three ways."

Griffin concluded by relating his own experience as a celibate priest.

"My experience has been similar to many other priests, which is that celibacy has in fact been a gift," he said.

"I planned to get married, I would have loved to have gotten married and had a family in many respects, but the Lord has used those desires and kind of transformed them, and I'm the happiest guy alive. And I think that a lot of priests would say the same thing. I hope that people are able to, in sorting through all the stuff being thrown at them, are able to still see that" that many priests are joyfully and beautifully living out their vocations."