The president of U.S. bishops' conference issued a statement on Tuesday condemning a newly-announced rule on asylum eligibility at the southern border, suggesting that countries like Mexico are not a safe final destination for asylum seekers, and encouraging the Trump administration to change the policy. 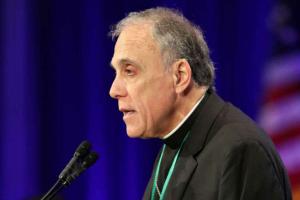 Washington D.C., (CNA) - "The rule adds further barriers to asylum-seekers' ability to access life-saving protection, shirks our moral duty, and will prevent the United States from taking its usual leading role in the international community as a provider of asylum protection," said Cardinal Daniel DiNardo, president of the USCCB, in a statement released July 16.

Practically, the new rule requires that asylum seekers traveling through Mexico from Central or South American countries must first apply for asylum in Mexico before being eligible to claim asylum in the U.S. The rule contains a number of exceptions.

Those who arrive at an American port of entry having passed through a country that has not signed up to certain refugee agreements are exempt, as are survivors of human trafficking.  Those who apply for asylum in a pass-through country and are denied there my still claim asylum in the United States.

Similar asylum policies are already in force along the northern border of the United States, as well as in the European Union.

The Canada-United States Safe Third Country Agreement, enacted in 2004, requires a person to claim asylum in either the U.S. or Canada, depending on which country they arrived in first. The Dublin Regulation in the European Union requires asylum seekers to register their claim in the first European country in which they arrive.

Speaking to CNA about the new rule, Bill Canny, the executive director for the USCCB's Migration Relief Services, told CNA that he does not believe that Mexico, or other Central American countries, can safely care for migrants or asylees.

"We do not have an agreement with Mexico in the same capacity in which we do with Canada, and while some of the countries that Central American migrants are traveling through may have some protections, we do not believe they are adequate enough to provide the type of protection that is necessary to assure their safety," Canny told CNA. "It would be immoral for us to keep those who seek asylum in harm's way."

The number of asylum claims has dramatically increased over the last decade, with very few asylees being allowed to stay. In 2009, there were 35,811 people who applied for asylum in the United States, and 8,384 were granted. In 2018, that number had more than quadrupled to 162,060 claims, with 13,168 actually granted.

DiNardo also used his statement, issued through the USCCB, to denounce the "climate of fear" created by ICE enforcement raids which began over the weekend. The raids were announced by the administration as targeting more than 2,000 people who had exhausted all legal options to remain in the country.

"Enforcement actions like those anticipated this week by the Immigration and Customs Enforcement agency separate families, cause the unacceptable suffering of thousands of children and their parents, and create widespread panic in our communities," said DiNardo.

"I condemn such an approach, which has created a climate of fear in our parishes and communities across the country. I recently wrote the President asking him to reconsider this action."