U.S. leaders called for a worldwide "grassroots" movement to fight religious persecution at a global religious freedom gathering on Tuesday. 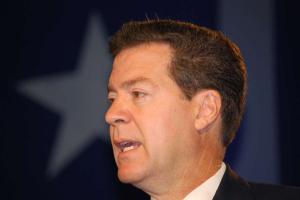 Washington D.C., (CNA) - The "iron curtain" of religious persecution must "come down now," U.S. Ambassador-at-Large for International Religious Freedom Sam Brownback stated on Tuesday at the opening of the State Department's Second Annual Ministerial to Advance Religious Freedom. "Let this be the beginning of a global grassroots movement for religious freedom," he said.

The Ministerial, held in Washington, D.C. from July 15-19. features over 1,000 religious and civil society leaders from around the world, along with over 100 foreign delegations and leaders of non-governmental organizations.

Eighty percent of the world's population lives in an area with religious restrictions, the State Department estimates. Secretary of State Mike Pompeo on Tuesday emphasized that freedom of religion is a fundamental, and public, right.

"All people must be permitted to practice their faith openly" whether at home, in public, or at a house of worship, Pompeo stated in his remarks opening the Ministerial.

The right to practice and live out one's own religion is fundamental and is already found in a "common foundation," Brownback said, in the 1948 United Nations Universal Declaration of Human Rights and "also in the constitutions of most countries."

He called on those in attendance to begin forming "religious freedom roundtables" in their own communities and hosting discussions between religious leaders on ways to protect freedom of religion for everyone.

"We need your activism. We need your passion. We need you to boldly fight for religious freedom," Brownback urged those in attendance. "As united we do stand, divided we fall - and often we fall in catastrophic, and sometimes even genocidal, ways."

Tuesday morning's panel began a multi-day session at the State Department. Additionally, several organizations in Washington, D.C. are hosting dozens of side events, highlighting religious persecution or promoting freedom of religion, including events at the U.S. Capitol with members of Congress.

The very fact that the U.S. is hosting such a comprehensive religious freedom event speaks volumes about how the issue has grown in importance at the State Department in U.S. foreign policy, Dr. Tom Farr, President of the Religious Freedom Institute, told CNA on Monday.

"If this is just the effort of one office in the huge bureaucracy of the Department of State "which, by and large, it has been up until now" then its ripples are very narrow," Farr said.

There is still a long way to go to build a broad "consensus" in the U.S. around the importance of religious freedom, Farr acknowledged. While some have prioritized the promotion of other human rights or have introduced new ones based on "personal liberation," others "including the current administration"have overlooked religious freedom when dealing with bad actors.

"It doesn't mean that we have to act as if there's nothing else going on in North Korea that we're interested in. Or China. Or Saudi Arabia," Farr said.

"It doesn't mean that we cannot cooperate with these governments, because we have other fundamental interests," he said, "but simply to pretend that these terrible abuses are not taking place is a huge mistake from our strategic point of view.

Promoting religious freedom can help victims of religious persecution, but "we can't make that case if we don't believe in it ourselves," he said. "And right now, we don't."