Pro-life women deliver semi-truck full of supplies, $72,000 to the border

The heat index in McAllen, Texas was 125 degrees on Saturday, but that did not stop members of the pro-life movement from delivering a semi-truck full of supplies and thousands of dollars in aid to respite centers at the border of the United States and Mexico. 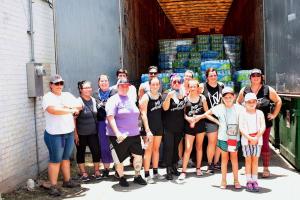 Brownsville, Texas, (CNA) - The #BottlestotheBorder campaign, launched by New Wave Feminists in partnership with And Then There Were None (ATTWN), collected more than $120,000 worth of supplies and donated more than $70,000 in aid funding to multiple respite centers, where migrants who are legally in the U.S. are temporarily housed and cared for while they connect with family members and figure out their next steps.

Abby Johnson, a former abortion clinic worker who is now a pro-life advocate and the head of a ministry that helps employees leave the abortion industry, spoke to CNA about the experience.

"We were unloading what feels like a million cases of water, and it's heavy and it's hot and it's exhausting, but you look at these families, and especially the children in this center, and you just realize that it's worth it," Johnson told CNA, "and you can't even complain about how hot it is or how tired you are or how sore your arms are going to be, because these children, they need this food, they need these diapers, they need these wipes."

Johnson said that the material items were donated to Catholic Charities in McAllen, Texas, which has a warehouse large enough to store the donated items. The monetary donations went to other respite centers in the area that are in need but do not have the storage space to handle large amounts of items at one time.

A fellow church-goer of one of ATTWN staff members had heard about the initiative and, as the owner of a trucking company, offered to drive an 18-wheeler to the border for the group, Johnson said. The catch: the truck had to be full.

"We did the first registry and filled that up in a couple of days, like in 48 hours it was full," Johnson said. The first registry filled about half of the truck, so New Wave Feminists and ATTWN launched another registry.

"By the end it was completely packed full of supplies," Johnson said.

While Johnson could not complain about the hard work that it took to unload thousands of boxes of supplies in the searing Texas heat, there was one frustrating part of the day, before the unloading even got started, she added. A press conference of about a dozen members of Congress had closed down the streets around the center, delaying the unloading of supplies.

"And it was really infuriating for me because here we are with no cameras, we weren't like, 'Hey media, come watch us unload this truck,' because it wasn't about us. It was about getting these supplies to these people," Johnson said.

Johnson "busted up" the press conference and invited the members of Congress to help unload the truck instead of just doing a photo-op at the center.

"I said, 'You know we've got an 18-wheeler full of supplies that will be here in 20 minutes, and if you really want to help these migrants and their families, you'll stick around and help us unload this truck.'"

"And they smirked at me and rolled their eyes and said, 'Well we only have 10 minutes, we can only give you 10 minutes, because we have another press opportunity that we need to get to."

"So you just see how these people (migrants) are being used by our government, by these Congress people," Johnson said.

The politics behind the border crisis are frustrating to Johnson, she said, because they often dehumanize migrants and distract people from doing something concrete to help the situation.

She said people have asked her if her efforts to bring supplies to migrants means that she supports an open-border policy. She doesn't.

"No I don't support lawlessness, I don't support an open border, I support legal immigration, doing it the right way, but the bottom line is I don't have the answer, I don't know the answer," she said, "but I can deliver these wipes so that babies' butts are clean and they're not getting infections. And I know how to make sure that a baby can get fed, and that's really what this is about. And that's what it is to be the Church, to meet the needs that are right in front of us."

Johnson converted to Catholicism several years after leaving the abortion industry in 2009.

Another frustrating aspect of the weekend was that on the same day that Johnson, Herndon-De La Rosa and their team were unloading their supplies, TruthOut.org published an opinion piece entitled: "The 'Pro-Life' Movement Is Silent About Children Dying at the Border."

"It came out the same day that we were in McAllen, and I was like really? Pro-life people don't care about people at the border? Tell me more about that, you know, as I'm sweating and disgusting and hot and gross," Johnson said.

The author has since reached out to Johnson and Herndon-De La Rosa for follow-up interviews, and admitted on Twitter that she had not heard of the #Bottles2TheBorder campaign when she wrote the piece.

But Johnson said that the pro-life movement, at least in some circles, still has a problem with the way they speak about the issue of immigration. She said that sometimes on social media, she will get comments from people in ultra-conservative groups who use "dehumanizing language" when discussing migrants.

"I don't know if they identify strongly as pro-life, but they are conservative, and they're coming on my page saying, 'Well we need to help Americans first, and Americans need to take priority,'" she recalled.

Johnson said the border crisis presents an opportunity to the pro-life movement to step up and prove that they are supportive of life from the moment of conception to the moment of natural death.

While the current #Bottles2TheBorder campaign has ended, the campaign's website includes a link to a list of respite centers along the border to which people can donate directly.