'Priests in the Park' offer public witness of confession, Catholicism in Michigan 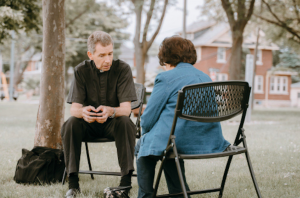 Detroit, Mich., (CNA) - In St. Mary's park in Monroe, Michigan, passersby and street traffic looked on with a befuddled look on their faces on June 17 while four Catholic priests, cleric-clad with stoles draped over their shoulders, heard the confessions of roughly a few dozen penitents over the course of two hours.

It was the second such "Priests in the Park" event for the 20,000-person community located 25 miles south of Detroit.

"My goal was to really magnify this awesome sacrament that the Catholic Church has, and put it out in public," Joe Boggs, one of the organizers of the event, told CNA.

Boggs is the Evangelization committee chair for the Monroe Vicariate, a regional group of Catholic churches that fall under the Archdiocese of Detroit. Boggs said he got the idea for a "Priests in the Park" event from an article in The Michigan Catholic about a similar event held in Plymouth, Michigan a couple of years ago.

"I said man, this is a great idea, let's kind of blow this up, put it on steroids, and we'll see what happens."

The Vicariate hosted its first "Priests in the Park" event in May, which was strictly priests hearing confessions in the park. For the June event, they added a Catholic speaker, some professional musicians, and a booth with holy cards, saint medals and other information about the Catholic faith.

They were also joined by members of St. Paul's Street Evangelization ministry, who spoke to any curious bystanders and helped explain the event and the Catholic faith.

"I think a lot of people have stigmas and stereotypes about not only the Catholic Church but also specifically confession," Boggs said, "so doing it out in public in a very vulnerable way, shows to people who are not Catholic, or to people who maybe used to be Catholic who now have bad ideas of the Catholic Church....that people are doing this out in public, they're being vulnerable, they're admitting that they're sinners."

Boggs said they received a lot of positive feedback about the event from both Catholics and non-Catholics.

"One comment that we got was that (a penitent) could see the face of Christ in the priest, and that it was just so merciful and so loving," Boggs said. "There was nothing judging that was going on there, it was more (about the priests) just being there with you, giving you counsel, and also absolving you of your sins."

Some people got in line and asked to speak with a priest and not necessarily go to confession, Boggs noted. Other people joined in the lines to chat with someone they knew, and then ended up talking with a priest as well, he said.

While the park where the event was held is named St. Mary's, it is a public park. However, the property used to be Catholic, Boggs noted. It was the site of the convent of the Sisters, Servants of the Immaculate Heart of Mary, who are still local to the area, but had to tear down and relocate their convent after it became dilapidated over the years. They sold the property to the city, which granted permission to Boggs for his event.

Nathan Hintz, 22, told Boggs for an article in the Detroit Catholic that he "loved that I was able to go to confession in public. This was a great opportunity for people to see how confession is nothing to be intimidated by."

"I think this was a great witness for this sacrament and for our faith," Hintz added.

Boggs told CNA that the committee hopes to make "Priests in the Park" events a summertime tradition, and will hold events through August or September, weather permitting. The next event is scheduled for July 13.

"I think it's a really good kind of exposure to (the Catholic faith)," he said.