The co-cathedral of the Diocese of Pensacola-Tallahassee was damaged by fire Wednesday, with several of the chairs in the sanctuary set ablaze using an accelerant. The church's rector has said he suspects arson. 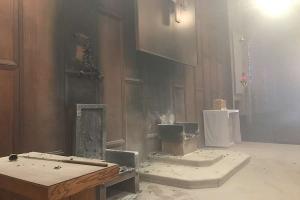 Tallahassee, Fla., (CNA) - According to the diocese, the cathedra and presiders' chairs were set on fire and were destroyed, while the flames charred the walls of the sanctuary and the building suffered smoke damage. No one was hurt and an investigation is underway, the diocese said.

Father John Cayer, rector of the Co-Cathedral of Saint Thomas More, told WCTV that a Florida State University student first noticed the smoke and called authorities. Mass was scheduled for 5:15pm on Wednesday, so the church was unlocked, he said.

"We have no idea who has done this," Cayer told WCTV yesterday.

"This is an obvious case of arson. We are very upset. The community is becoming very upset and we hope that there is some resolution to this."

'I am saddened to hear of an apparently intentional fire set at the St. Thomas More Co-Cathedral in Tallahassee yesterday," CFO and State Fire Marshal Jimmy Patronis said in a statement today.

The diocese said they are hoping to be able to celebrate weekend Masses in the church.

'We are hurt, upset, and deeply saddened, but we continue to place our hope in Christ during this Easter season in which we celebrate His resurrection," the statement concluded.