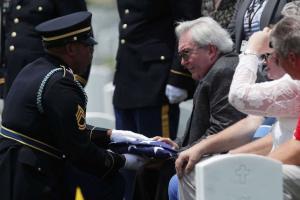 Arlington, Va., (CNA) - Both of the Manns' lives were changed forever on June 6, decades apart.

For the patriarch of the Mann family, his life-altering June 6 came in 1944, when he was part of the second wave of soldiers who stormed Omaha Beach as part of the D-Day invasion. Gordon's was in 1992, when he was ordained a priest of the Diocese of Evansville.

According to Miles and Carl Mann II, two of Carl Sr.'s sons, nobody realized the significance of the overlapped dates until they began planning their father's burial at Arlington National Cemetery " which was also held June 6.

The brothers do not believe this happened by chance.

"It's not a coincidence, I promise you," Miles told CNA. "I'm not good enough to try to coordinate anything like this and put all these pieces together. But God's perfect and that's how it happens."

Their father lived his life by a simple motto: "God, country, and family."

While in the army, Mann would take time to pray and evangelize, even in the face of death and in the midst of bloodshed.

Mann would baptize soldiers in the middle of battle. Miles said he "was basically just the hands and feet of Jesus to do that."

Carl II said that his father was willing and able to baptize on the battlefield as he knew that he was "spiritually ready" to die, and wanted to make sure others were as well.

"He just knew there was nothing in the world more important than (baptism)," said Miles. "Not even his own life."

Some soldiers came to know Christ in their dying moments because of Mann's battlefield prayers.

"His buddies would ask him was he was doing because they saw him kneeling down praying in the middle of the battle. And, a lot of those men didn't know who Jesus was," said Miles. They would ask Mann to teach them how to pray, and he would reply, "just listen."

"He'd finish the prayer and then they would finish whatever skirmish or battle or event they were in the middle of. Some of them made it, some of them didn't, but the ones that did not make it, they got to meet Jesus through him."

Initially, Sgt. Mann was reluctant to discuss his military experience, and would often make jokes relating to his service.

"He would say, 'Boy, I couldn't wait to get off that (Omaha) beach. We were out of hotdogs and the ice cream was melting,'" said Miles. That all changed about a decade ago, after he was asked by a grandchild on which side of World War II he had fought.

Realizing that history was at risk of being forgotten, he began to open up more about his service, and shared his story at high schools and to his family. In addition to Normandy, Mann also served in the Battle of the Bulge and assisted in the liberation of two concentration camps. He was awarded three Purple Hearts and seven Bronze Stars, which enabled him to be buried at Arlington.

Sgt. Mann's priorities of God, country, and family will leave a lasting legacy after his death.

"I think that I could give one perspective on it. It's Dad's statement was this: You know, my brother is him," said Carl II, gesturing around.

"My brothers were willing to die for freedom. He said, 'but there was only one who died for our sins.' And that was his faith." 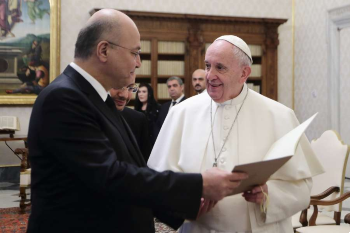