Protesting "Bans" Misses the Point - and the Victim

Today is the nationwide #StopTheBans protest against abortion laws enacted or on the way in some 15 states in the United States. 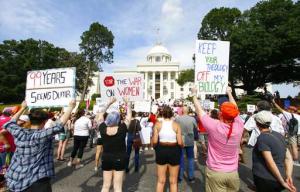 Fr. Frank Pavone, National Director, Priests for Life - We have seen so much pro-life progress in the last several years that people who support abortion are downright scared. They have good reason to be. Aggressive pro-life laws '" I use that adjective in the best sense of the word '" are protecting babies at all stages of life.

Today's protesters call these laws bans, and they are trying to tap into the almost universal dislike of things that restrict our freedom '" think of travel bans, import bans, even bans on free speech.But today's #StopTheBans protesters will never say exactly what they're against, namely, laws that protect babies from being killed in the womb.

These people have gotten nervous in the past when we have passed laws to protect babies from dismemberment or other later-term abortions, but these new laws, like the one signed by Alabama Gov. Kate Ivey May 15, are protecting babies in the first trimester, when the vast majority of abortions take place. Now we have people going nuts.

They try to say that the child in the womb is not a human being. In fact, former New York City Council Speaker Christine Quinn recently said that very thing.But thanks to the views inside the womb made possible by the developing science of embryoscopy, we can see the child in the womb from the earliest stages. What we see is clearly a human being, with eyes, hands and a beating heart.

These new laws protect babies that most people never see, while our opponents can only scream about bans on their reproductive rights. What word never appears in discussion from the other side? Baby. What they also fail '" or refuse '" to recognize is that the states passing these laws are doing so according to the will of the people, represented by the lawmakers they elected. Even the New York Times had to concede, in a recent article, that "In Alabama, Opposition to Abortion Runs Deep."

From the story: Opinion polling has repeatedly shown that a broad segment of Alabama voters, including a majority of women, generally oppose abortion rights, and for many of them, passage of the ban was a triumph.
Just last year, residents overwhelmingly endorsed a change to the State Constitution declaring it Alabama's policy "to recognize and support the sanctity of unborn life and the rights of unborn children, including the right to life."

Although women hold only 22 of 140 seats in the Alabama Legislature '" one of the smallest percentages in the country '" they also held important roles in the abortion debate in Montgomery, the capital. A woman, Representative Terri Collins, was the primary sponsor of the new law, and Gov. Kay Ivey, the second woman ever to lead Alabama, signed the ban, calling it "a powerful testament to Alabamians' deeply held belief that every life is precious and that every life is a sacred gift from God."

The pro-abortion side likes to paint laws like Alabama's as "extreme," without ever addressing where the real extremism lies. Look to New York State governor, and fake Catholic, Andrew Cuomo for abortion extremism '" in his state, babies can be aborted up until birth and those who survive an abortion left to die. Or they can look to Virginia Gov. Ralph Northam's accidental admission that babies who survive abortion will be kept comfortable while their mothers decide if these newborns should live or die.

These fanatics call us extreme. But before anyone opens his or her mouth to say new laws are going too far, they should open their eyes and look at these babies revealed to us through embryoscopy. Then they can decide who's the extremist.

Another truth the #StopTheBans protesters are overlooking is that the extreme laws that would expand abortion in some states are failing. The bill in Virginia that led to Northam's admission has been tabled indefinitely. Extreme laws in Rhode Island and New Mexico have failed.
These are deeply unpopular laws. Americans know that more abortion is not the answer to any of our nation's problems and that the blood 60 million aborted children is a stain on our nation.

Today's protesters '" urged on by the abortion profiteer Planned Parenthood '" like to say they are in a fight for their lives. For the nation's largest abortion seller and other abortion businesses, that is certainly true. The abortion industry is collapsing as Americans reject the culture of death that has enveloped us for too long.

Don't for a minute be fooled by the display of childishness happening in our cities today. More and more Americans have come to realize that human rights begin at conception and not one moment later.

Counter these protests today by speaking up '" on social media, by contacting your elected representatives and just in conversation with your families and friends.  Speak up for the moral and legal sanity that protects babies from abortion.

We are in a fight for babies' lives, and the soul of our nation.