'We all need to be a little more like Kendrick': Friends and family remember STEM hero

A funny, selfless, and kind kid who loved tinkering with his car, goofing around with his friends, and above all, serving others, whether at Knights of Columbus pancake breakfasts or in robotics class - this was the Kendrick Castillo that friends and family gathered to remember at a celebration of his life on May 15 at Cherry Hills Community Church. 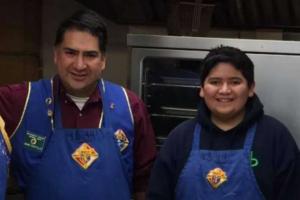 Denver, Colo., (CNA) - "Unless a grain of wheat falls to the ground and dies, it remains just a grain of wheat, but if it dies, it produces much fruit," Fr. Javier Nieva, pastor of St. Mary's in Littleton, Colo., said at the ecumenical celebration. The quote, from Jesus, is in the Gospel of John.

"We celebrate fruits today," Nieva said. "Not death (but the) fruits of his life."

Kendrick laid down his life for others not only "in the moment of dying, but in his love for his family, his passion for service, his love for the truth" and helping others, Nieva said.

Kendrick Castillo, 18, gave his life to protect his friends when he jumped into the line of fire to stop a school shooter on May 7, according to witnesses. Castillo was the only casualty in the shooting at STEM high school in Highlands Ranch, Colo.; eight other students were injured in the incident.

On a sunny Wednesday afternoon in May, friends and family packed Cherry Hills Community Church to remember a funny and kind friend, parishioner and son who was always smiling and helping others. On display at the church were some things representative of Kendrick's hobbies and passions: a kayak, a red blazer he wore while ushering at Notre Dame parish, robotics and engineering paraphernalia.

Former teachers and friends from school took to the stage one by one to share a favorite memory of Kendrick, to extol his virtues and thank his parents.

"Kendrick is forever a brother within the Knights of Columbus," Nguyen said, presenting a plaque that came from members throughout the country and the world.

"I remember Kendrick for the just young man he was, the one who imitated Christ's self-sacrificing love so that others might live and be safe," he said. "Kendrick loved people, he loved his Church, and he loved his God."

Charlene Molis, the principal of Notre Dame Catholic School, which Kendrick attended from pre-K to 8th grade, remembered a loving child who "is certainly proof that one person can make a difference."

Molis said she saw Kendrick's caring nature on the very first day of preschool, when he noticed a little boy crying across the room.

"The little boy was missing his mom," Molis said. "Kendrick walked over, put his arm around him and told him it was going to be ok."

She remembered a student who "respected everyone and always did his best." She remembered that he liked to get dressed up for school plays as a cowboy or a pilgrim, but when it came to all-school Masses, he donned a three-piece suit.

She remembered his ability to figure out "anything technology related," and how by the time he was a 6th grader, he became a sort of pseudo IT technician for his teachers, helping them with computer issues. She remembered his bright smile, quick wit, and willingness to collaborate with his teachers in playing jokes on his fellow classmates.

Most of all, she remembered how he served others.

"He seemed to be happiest serving others, and he did this humbly," she said, whether it was working in the background to put on the school talent show, making and serving pancakes for the Knights of Columbus, DJing school dances, leading the computer club, or serving on the student council.

"He was the first to arrive and last to leave at school and church functions," she said.

"He was the epitome of a young Christian man, and an inspiration to everyone who was lucky enough to know him," Molis said. "We love you, Kendrick. We are all better people for having known him."

Jordan Monk, Kendrick's best friend, said they first met as freshmen in an engines class in high school. When it became clear that Kendrick knew the most about engines in the class, Monk jumped at the chance to become his lab partner.

"Our friendship started purely out of survival instincts," Monk said. "I wanted an A in that class, and found the best way to do so."

But after just one class period, "I like many others knew there was something special about Kendrick. I'd figured we'd get along just fine as lab partners, but I had no idea he'd have such a profound impact on my life."

The two bonded over lab projects and mishaps, and soon became best friends.

"Teachers had a love-hate relationship with us," Monk said. "They loved us because of the joy and laughter that we brought to class, but that joy and laughter was apparently distracting for some students."

When they weren't in school, Monk spent hours with Kendrick in his backyard, where they would tinker on mini-bikes or golf carts, and on their cars once they got their licenses.

"We changed brakes and oil...and detailed our cars almost religiously," Monk said. "Whenever I was able to drag (Kendrick) to our school dances, we always had the two cleanest rides."

Monk recalled a favorite memory with Kendrick, when they dressed up as the main characters from the movie Wayne's World, and drove around with their car tops down, fake mullets flowing in the wind, and Queen blasting on the radio.

"The only sound you could hear over Bohemian Rhapsody was our laughter," Monk recalled. He said he and Kendrick often were up to things that could be considered weird, but they didn't care, "because we had the time of our lives doing it."

At the end of the celebration, Kendrick's father, John, addressed the crowd. He thanked the school and church communities and first responders for their care and support, and said he has "felt the love of thousands" in the days since his son's death.

"If we had to describe him a certain way, first it would be love, the love for anybody he met," John said. "I mean anybody. He was compassionate. If you were walking down the street and fell, he'd walk over to make sure you're ok."

"There's risk in love," he added. "There's risk in being hurt, in rejection. Kendrick knew all of these things and he never wavered. He knew right from wrong, and we all do."

John remembered Kendrick as a son who valued relationships over physical things, who cherished hunting trips with his dad and grandpa and loved going to animated movies with his mom.

"I always knew he was a gift and a hero, he was filled up with the good stuff" of life, he noted, like faith and love.

He encouraged those present to "walk your faith like Kendrick did," recalling how his son would take off his hat and bless his food before eating at Taco Bell without caring what people might think.

Kendrick's funeral and burial will be at the end of this week. The details are kept private at the request of the family.