Cardinal Blase Cupich of Chicago is distancing himself from the decision of a pastor who invited controversial preacher Louis Farrakhan to speak at his parish, saying that he was not consulted before Farrakhan's talk. 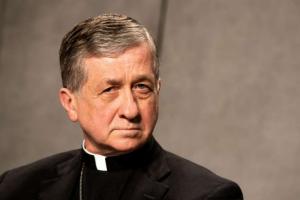 Chicago, Ill., (CNA) - "Antisemitic rhetoric '" discriminatory invective of any kind '" has no place in American public life, let alone in a Catholic church," Cupich said in a May 10 statement.

Farrakhan, 86, is the founder of the Chicago-based group Nation of Islam and has a history of anti-Semitic preaching.

"I'm here to separate the good Jews from the satanic Jews," Farrakhan said at one point during the talk.

"I have not said one word of hate. I do not hate Jewish people. Not one that is with me has ever committed a crime against the Jewish people, black people, white people. As long as you don't attack us, we won't bother you."

Fr. Michael Pfleger, pastor of St. Sabina Church, invited Farrakhan in response to Facebook's decision May 2 to ban him from its platforms, due to Farrakhan's violations of the site's policies regarding "hate speech." St. Sabina is a predominantly African American parish in Chicago's South Side.

The Archdiocese had released a statement May 9 reiterating that the event was not sponsored by the archdiocese.

"Minister Farrakhan could have taken the opportunity to deliver a unifying message of God's love for all his children. Instead, he repeatedly smeared the Jewish people, using a combination of thinly veiled discriminatory rhetoric and outright slander," Cupich said.

"He referred to Jewish people as 'satanic,' asserting that he was sent by God to separate the 'good Jews' from the 'satanic Jews,'" Cupich noted.

"Such statements shock the conscience. People of faith are called to live as signs of God's love for the whole human family, not to demonize any of its members...I apologize to my Jewish brothers and sisters, whose friendship I treasure, from whom I learn so much, and whose covenant with God remains eternal."

The Illinois Holocaust Museum and Education Center has reportedly extended an invitation to Pfleger to meet with their leadership and dialogue with survivors. Cupich encouraged the priest to accept the invitation.

This is reportedly not the first time Plfeger has hosted Farrakhan to speak at his parish, and also not the first time the archdiocese has had to walk back controversial comments by the priest. In 2008, the late Cardinal Francis George had to publicly respond to comments Pfleger made deriding Democratic Sen. Hillary Clinton and advocating the candidacy of Illinois Sen. Barack Obama.

In addition, George suspended Pfleger from his ministry at St. Sabina in 2011 and barred him from celebrating the sacraments because of public statements Pfleger had made, the Chicago Sun Times reports. Pfleger reportedly threatened to leave the priesthood unless George relented.

"He said there were good Jews and there are bad Jews, true. There are good Catholics and bad Catholics," Pfleger told ABC7 news regarding Farrakhan's talk.

"I'm doing what I believe the Gospel calls me to do and continue to try and bring people together and try to speak truth."

Pfleger said he has known Farrakhan for 30 years and embraced him after the talk. Pfleger has said that Farrakhan and the Nation of Islam are respected locally for their anti-violence and anti-drug campaigns, CNN reports.